It´s time for a revolution! A revolution in traffic safety, that is. Governments around the world have declared the next years as “Decade of Action in Road Safety”. The UN General Assembly resolution for 2011 – 2020 was co-sponsored by more than 90 countries. Changes are necessary to reduce the number of people severely injured or killed in road traffic accidents. Considering the fact that approximately 1.2 million people worldwide die in traffic accidents each year, this is one of the most important topics for all stakeholders.

Before starting to develop technical features and functions, an analysis of the crash situations in the different regions of the world is necessary. This has to be done in all detail and with all available tools and statistical methods. For reasons of easiness, the following generous statements shall though be enough to describe the global situation and extract consequences out of this context.

When it comes to road traffic safety, the world can be segmented into two different regions with different problems. There appear to be a lot of differences between emerging countries like China and India and emerged countries like in most of Europe or the US. The first group shows a rather poor traffic infrastructure, a small but quickly growing car population and an extremely high number of traffic fatalities. Even though no reliable accident statistics are available, approximately 190,000 traffic deaths are estimated each year in India only. At the same time, India has about 73 million cars on the road. Europe, on the other end, with a much larger number of vehicles and miles driven has dramatically lower fatality rates. On the extreme, in the comparably small country of Germany only, a little less number of cars is registered (55 million) but the number of accidents fatalities is as low as 4000. The emerged countries in Europe or the US, or countries like Japan show a historically continuous growth in traffic volume with the infrastructure growing at about the same speed. Their vehicles are equipped with top of the edge technology and the renewal rate is high.

As a consequence, countermeasures to reduce traffic fatalities in the regions mentioned in the beginning have to concentrate on traffic infrastructure, mainly. The performance of new vehicles, registered in those countries, will profit from the advancements the car manufacturers make to fulfill legal requirements or consumer group assessments in other countries. In emerged countries, the major concentration lies on optimising the vehicle performance even further. This article will describe that a revolution in this area is nevertheless necessary, in order to make further progress.

During the last two-three decades the Passive Safety – i.e. all the measurements that protect occupants in accidents that could not be avoided like seat belts, airbags, etc. – was strongly developed. Recently, the Insurance Institute for Highway Safety (IIHS) in the United States crash-tested a historical MY 1959 Chevrolet Bel Air and compared it to a 2009 Chevrolet Malibu. One of the impressive results was to see the passenger compartment of the Bel Air collapse and trap the occupants whereas the driver and passenger of the Malibu had a good chance of no or only minor injuries in an intact passenger compartment. The same can be seen in a comparison between the first EuroNCAP tests (European New Car Safety Assessment Programme) and the most recent ones.

The new BMW 5series appears to be on the top edge of this development. The car has earned so many safety awards like never before. This is even more impressive since most of the safety assessments have increased their requirements recently. Yet, 40,000 road traffic fatalities in the US and approximately the same number

in Europe cannot be neglected. The question remains: What comes next? How can we increase the safety performance even more to save even more lives?

The accident statistics of Germany, as an example, show that different measurements contributed to the positive trend. Even though the number of miles driven has continuously been growing, the total number of accidents between 1991 and 2010 has continued to be more or less constant. The major reasons for this positive trend are improvements in traffic infrastructure, better education of the drivers and last but not the least, better Active Safety performance of the vehicles, i.e. better brakes, better suspension, vehicle stability systems, etc. 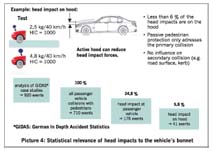 The number of injured persons and even more, the fatalities, has gone down significantly in the same time. Most contributing factor for this life saving situation is the progress that was made in Passive Safety. Energy absorbing crumple zones in the front end of the car, stiff passenger compartments, seatbelts, intelligent belt pretensioners and seatbelt load limiters, side airbags or smart bags for front collisions are only the most prominent features that led to the results like decline in crash fatalities by 60% between the years 1991 and 2010.

The list of features and functions of Passive Safety demonstrates that the major focus so far was on the occupants inside the car. Vulnerable road users like pedestrians or bicyclists have not profited much from all the improvements on the vehicle side. In Germany today, approximately one fourth of the annual fatalities belong to this group. The number of killed pedestrians has declined to a remarkable extent, though. The most contributing factor to this effect is the implementation of better infrastructure for the walking part of the traffic participants. Clearer sidewalks, pedestrian crossings and traffic lights or bridges in combination with stronger enforcement have played a positive role in this area. Of course, better brakes, brighter headlamps and other vehicle components have also contributed but the biggest effect comes from vehicle independent measurements.