‘Significant effort is being made to enhance Public Transport’

Yudhvir Singh Malik, Secretary, Ministry of Transport & Highways, was the Chief Guest at TrafficInfraTech and ParkingInfraTech Expos in Hyderabad in September. Excerpts from his Chief Guest’s Address.

To the limited extent that I understand smartness, I want to take you all to three scenarios. 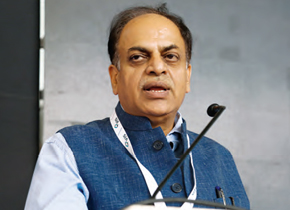 Scenario One: A farmer in a village, who is not IT savvy and uses a feature phone only to receive calls and messages, has to travel to a distant place about 1000kms away. He takes off from his village and goes to nearest city. Now, what does he use for taking off from his village to the nearest city? To what extent is he sure of getting a transport from the nearest city to the first destination where he has to travel by road by a public transport — a bus? He probably waits for a couple of hours, tries to get a ticket, boards a bus, travels about 100kms, and goes to a station from where he has to take a train. He is not sure whether he will be able to get a ticket in the train or not, he is not sure which platform he has to go to, or what time the train will start. And that’s how with all these challenges he still completes his journey from the origin to the destination. He reaches the destination point through the rail. From there he has to go to X place, which probably we all have started terming as the last mile connectivity. How does he go there? Does he walk? Does he take a rickshaw, or a local intra-city bus? That is one set of people which constitutes 25% to 30% of the population of this country.

Scenario Two: The second guy stays in the city. He goes to the city bus station — probably his child drops him on a two-wheeler. He is a level higher than the first guy. As he is dropped at the station, he can get a ticket and has an option of travelling by bus or rail. From there again, he has the option of travelling another 1000kms by air or train and at each of these joining points, he goes on with those uncertainties.

“If a person is not notified 500mtrs before any important information whether he has to take a right or left, then I think you are creating an opportunity for an accident”.

Scenario Three: The third guy moves in a zone car. He decides to use his personal transport. He has no hassles with regard to catching up with different modes of transport at different taking-off points but, he takes the road, and finds the road does not carry enough signages or indications for him. He finds that he does not know which part of the road would be under a traffic jam. He does not know where there would be a resting place – a wayside amenity. He needs to refuel his vehicle but does not know where the petrol pump would be. He crosses toll plazas during this process at two–three locations, and each of the toll plazas is a pain – it takes its own queue time. Finally braving all this, when he reaches his destination, he is not sure where to park his car.

I have shared these three kinds of stories with you only to highlight that the system through which we address these concerns at each of these places is perhaps what your smart mobility would be covering.

In the point-to-point connectivity, whatever the aggregator — the e-rickshaw, Uber, Ola or any other aggregator — it is a big welcome. What does integrated approach mean here? When I go to a bus stand to buy my ticket for the bus and then to the train station to buy my rail ticket at the next destination and further, buy my air ticket at yet another destination, a question arises: should I not be able to get my bus, rail, and air tickets at one single place keeping the margins of those journey segments in mind? I should be sure about my start time at these destinations. The effort to bring about smart mobility is to tie these loose ends in the mobility of any person. Smart mobility has to be different for different segments — it is different for a passenger segment and different for a logistics segment. In a logistics segment, by using smart technology features in managing his business, a person is optimizing his vehicle utilization, keeping track of the movement of his goods to his clients, and ensuring that the deliveries are taken in time.

I will share two incidents with you again. Years back I was staying in England and doing a course. When I was leaving the UK to come back home, I decided to take a flight from Manchester. I took a coach at 11.00 pm, where the scheduled time for reaching the airport was 4.15 am. The flight was at 6.00 am, so I had to check in by about 4.30 am. In our conditions I do not know if I would have taken that risk but since that was a much more organized scenario and an assurance was written on the back of the ticket that ‘if we don’t drop you within 10 minutes of our promised time, we return your fare’, I took the risk. Now the second incident. The Swiss trains are considered to be very-very meticulous and it is said, you can correct your watch with the timings of Swiss trains. But I think the high level of smartness of those systems also somewhere erodes your own genuineness or your capability to meet with those challenges. I took a train in Bern. There, if a train is half an hour late or something goes wrong in the train, an announcement is made on the PA system like: “We are sorry there is some fault in the engine, we are getting the team and looking into it. Please bear with us for 15 minutes”. This is what happened with us. They kept repeating this announcement for another 15 minutes. We had started at about 1.30 pm and the arrival time at the destination was 5.35 pm. Many people travelling with us were supposed to take a flight from there and then a connecting flight. We couldn’t move for one hour and then somehow, we got this news that an engine was being brought from Bern which would tow our train, take it back to Bern which was half an hour journey and then from there we had to get into another train, which would move towards the destination. Such situations were so common for us in India. I thought: ‘If you are getting that engine, why do you take that train back? Just push it and take it to the destination – in any case that engine is capable of doing it’. But I think when you are too systemized, that logical side is also lost. All said and done, it is the predictability, the certainty of different timings and the integration of different transport modes which becomes critical at certain points in time.

Previous: ‘Our penalty points are a big deterrent to traffic offenders’
Next: Traffic data collection and road safety