The green hilly environment of Sikkim will soon hear the buzz of aircraft engines as a green airport is about to come up at the state’s picturesque location, Pakyong. Ask any infrastructure company about constructing an airport in mountainous terrains, and they will tell you about the immense rocky challenges they face. Punj Loyd was awarded the contract by the Airport Authority of India (AAI) for constructing the airport and M/s Mott MacDonald Pvt Ltd was chosen for designing the airside of the airport. Maccaferri Environmental Solutions Pvt Ltd (MESPL) was given the sub contract of providing materials for the construction of a very important part of the project – the reinforced wall, by Punj Lloyd.

Sikkim’s nearest airport is Bagdogra, at a distance of 16km from Siliguri. Hence, a decision was taken to build a Greenfield Airport at Pakyong which is 30km away from Sikkim’s capital, Gangtok. Pakyong, a small town in the foothills of the Himalayas, is located at an altitude of 1700 metres i.e. 5577 feet. It is connected to different parts of India through an all-weather metalled highway – NH31A (Siliguri to Gangtok). The airport, under construction since January 2009, is expected to be ready by April 2013.

SS Raju, CEO, Punj Lloyd Infrastructure says, “Punj Lloyd is proud to be associated with building Sikkim’s first greenfield project in Pakyong which will provide air connectivity to this land locked state with the rest of India. The airport is a spectacular site as it is being built at an altitude of 4700ft with deep valleys at both ends of the runway. Punj Lloyd is building one of the tallest RE walls of the world, as high as 80.38 metres. While executing this project, all efforts have been made to present a masterpiece with utmost emphasis on quality and safe working practices which are comparable to international standards and are worthy of being emoted by others.”

The 2156 metre long tabletop airport with a basic width (strip) of 150 metres is planned to have a 1700 metre long and 30 metre wide runway. The airstrip is expected to cater to small turboprop aircraft like the ATR 72s in the beginning. When completed, it will be among the five highest airports of the country. The entire airport which will have Asia’s biggest Geogrid Reinforced Retaining Wall, is being constructed on a landing which is being created by building an 80.38 metre high embankment. Sikkim is mainly formed by the oldest Pre-Cambrian rocks of Daling series and Darjeeling gneiss. They consist of phyllites and schists which make the slopes highly susceptible to weather and erosion. Excavation works for the runway made by cutting the Pakyong hill range between a height of 70m to 100m while the reinforced soil structures range between 70m-80m.

Punj Lloyd’s scope of work includes earthwork in cutting & filling, geogrid reinforced retaining walls, drainage system including box culverts and aerodrome pavements including apron, runway & taxiway. The material for the special reinforced wall which forms a major part of the construction and is expected to check soil erosion on the hill slopes, has been supplied by Maccaferri.

Ashish Gharpure, Chief Operating Officer, Maccaferri Environmental Solutions Pvt. Ltd (MESPL), says, “Punj Lloyd gave us a sub contract for supplying material, supervision and design vetting for the use of the material for the Reinforced Wall. Since the design is material-specific, MESPL also gave necessary inputs regarding the design for the right usage of its material. It later verified the design for the wall and supervised the construction of the wall to check if both met with the company’s norms on the material supplied. Though Maccaferri did not physically construct the wall, it was involved in the filling part, and on ensuring the surface stability of the cut section and the toe walls.”

Abnormal heights, mountainous terrain – a mix of soil and rock, high seismicity, heavy rainfall, heavy cutting and filling work, drainage work and limited water resources were some of the challenges the work teams faced on the rocky slopes. In order to maintain the rich flora and fauna of the area and not impact the environment adversely, the construction style for the project had to be altered accordingly.

The loads considered in design are earth pressure, seismic loads, live load and dead load surcharge — wherever it is relevant. Material reduction factors are considered in calculating the long term design strength of primary reinforcement from its short term ultimate tensile strength. The design is mainly carried out as per BS 8006: 1995 for static load combination.

“The Greenfield Airport being the first of its kind in India, it was a challenge to construct it at a remote land locked location. The airport contract is on construction basis. The volume of earth work was huge and the specifications were very stringent. To construct 80 metre high earth fill wall in layers of 0.30 metre itself was a challenge. The main challenge is to mobilise heavy earthwork and concrete equipment through the narrow hilly road in parts and assemble the same at the project location. The weather of Pakyong also adds to the challenges. Long monsoon from April to September hinders the progress of work every year,” says Raju.

While the upper strata of the terrain is fragmented and highly weathered, soft to hard rock exists in the deep strata. The site itself is surrounded by valleys and hills. The need was to create a plain surface for the construction of the airport on the hill slopes from the West side which is the uphill cutting portion to the East side which is a downhill filling portion. The runway strip will move from the North to the South direction as it is being carved out from the sloping hills of Dikling from Karthook to Pakyong Bazaar. For creating the plain surface to construct the runway at the required level which would enable the construction of the airport, the entire volume of material that is received from cutting the uphill portion is used to fill the downhill portion.

In order to retain the filling, composite soil reinforcement system that is high enough to support and stabilise the filling is provided. The maximum depth of cutting is about 40-50m and height of the filling is up to 70 metres. “In order to save Pakyong Bazaar area and other important places near the site, this filling was proposed to be retained by providing reinforced soil retaining structures high enough to support and stabilise the filling. In the uphill portion, the slopes were stabilised by providing suitable toe protection walls,” says Gharpure. Cutting and filling of the huge earthwork is one of the most challenging tasks of constructing this airport.

So, the highlights of the construction work at the site include:

Maccaferri specialises in providing its innovative core material Paralink and in combining more than one soil reinforcement systems for the design. The latter has enabled a complete replacement of the conventional civil engineering solutions of a RCC Retaining Wall which reduces costs and gives better environmental and social gains.

Says Gharpure, “At present, we are focusing on protection and stabilisation works for the airport. We are the technology providers in the development of 1.7 km of retaining structure for the runway for an ATR-size aircraft. The technology is mainly for building the wall up to the size of 75m in height which is the highest structure built as a wall in the world. The project is generating curiosity because of its unique design construction. Airports Authority of India has also got the Greentech Award by using this technology.”

Previous: Interview with: Sanjay Arora, “We will record a 20% increase in fines this year”
Next: Sustainability Issues in Pavement Engineering 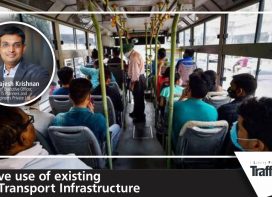