During the past two-three decades developed countries experienced major technological developments in traffic control. Sadly, their established traffic signal optimization proved ineffective and very expensive for changing the infrastructure in developing countries. The big percentage of two and three-wheelers and especially the non-lane based behaviour make the correct detection of traffic demand with conventional loop or video sensors very difficult, if not impossible. PTV Group chose to follow a three-fold approach with existing infrastructure and heterogeneous traffic behaviour. 1. Using a video based detection specifically tuned for non-lane based traffic 2. Ability to provide intelligence to the existing signal controller and 3. Test and enhance signal strategy using microsimulation before adapting signal time. Only after seeing several results in microsimulation, PTV installed its system on ground in India’s first planned city – Chandigarh using PTV Epics and PTV Balance. The Key Performance indicators like traffic flow, travel time, queue length, number of stops, speed and average delay have been compared with pre- and post-installation.

Developing countries are way too far to accept lane based traffic movement due to too many transport system. Also, developing countries have a lot of slow moving vehicles. By keeping all the factors into consideration and keeping in line with the past development, PTV Epics was developed to address most of the traffic related problems locally at the intersection level, whereas PTV Balance looks for an area wide optimization to reduce traffic congestion on major streets for a non-lane and heterogeneous traffic. The detection technology determines the total demand to the junction for optimizing traffic lights. We propose video based detection technology which take into accounts all the vehicle crossing the defined area across full width of an approaching road. 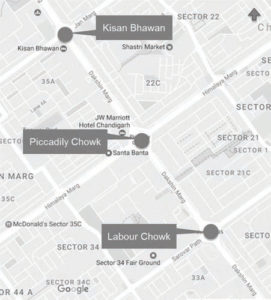 PTV EPICS (Entire Priority Intersection Control System) analyses traffic conditions locally and determines the best control option to improve traffic operation on all approaches. The model-based control system decides in seconds whether a phase should be omitted, shortened or lengthened, or if the phase sequence should be changed. It estimates the traffic conditions for 100 seconds into future, based on real time detector data, current queue length, and cyclic flow profile. Then it uses its internal model to evaluate the different control options before applying the best one. In this process, it takes all modes of transport into account – from individual motorized transport and pedestrians to prioritizing public transport. In operation, PTV Epics accesses the camera data for the node, uses it to recognize the incoming vehicle flows, and adjusts its simulation model for calculating the effects of different control options based on this. In less than a single second, PTV Epics optimizes the phase sequence and its timings by optimizing the total performance index. For example, a bus will receive priority at the intersection if public transport is prioritized by being assigned a high weighting.

PTV Balance (Balancing Adaptive Network Control Method) is for optimizing traffic network signal control. A macroscopic traffic model estimates flow from real-time traffic detectors placed along the road network. The traffic volume inputs are used to identify any changes in transport patterns, allowing the actual traffic situation to be modelled for an entire road network. It then accesses different signal settings and control options for the road network and can interface with traffic signal controllers to

implement updated signal phasing plans. The program considers the network simultaneously, and can therefore integrate traffic signal controllers at individual intersections to coordinate green waves along a network, as well as reduce the overall delay of the network. The model based network control optimizes the signal programs every five minutes in response to current traffic flows.

Chandigarh is a Union-Territory and the joint capital of Haryana and Punjab state. The metropolitan of Chandigarh along with Panchkula and Mohali is known as Tri-City and has a population of over two million. The network plan of Chandigarh is grid-iron pattern with different hierarchy and it is planned to have a smooth and safe mobility for all road users. Chandigarh city also ranks top in highest number of car ownership in the country which leads to major traffic problem. Due to increase in vehicular flow year0over-the-year, the accident rate is also on the rise, with motorized vehicles being predominant. Dakshin Marg and Madhya Marg are two important arterial roads which leads to Kalka and Ambala. The important institutional and commercial buildings are located on Dakshin Marg, Jan Marg, Himalaya Marg, Purv Marg, etc. Total length of the project corridor is 1.6 km and junction are separated at 750 meters interval. Three junctions, namely Kisan Bhavan chowk, Piccadily Chowk, and junction 35/labour chowk are located on Dakshin Mar. These were selected to test and evaluate Epics and Balance in non-lane behaviour traffic.