Surat: Smart City in the making

To support economic activities concentrated in the heart of the city, a ring corridor – High Mobility Corridor serving either directions for a length of 12km and 22 stations is proposed. The corridor will be serviced by 34 high quality buses with a frequency of 3-4 minutes in peak hours assuring reliable services.

SMC in association with MEGA & DMRC is working on a detail feasibility report for Urban Metro Rail service. The City has adopted the strategy of integrating the metro with BRTS and city bus services to develop an integrated mass network for Surat.

Phase I of the metro system is planned for a network of 38km with approximately 38 stations. This consists of the east west line planned to connect: Sarthana to Dream City and North South line to connect Bhesan to Saroli area. In phase II, 10kms of additional corridor is under consideration which is yet to be finalized.

An Integrated multi-modal system is proposed to integrate BRTS, high mobility corridor (proposed), city bus services, Metro (proposed) and urban ferry system (proposed) to provide seamless connectivity and mobility across the city. The system is proposed to have physical, fare, information and institutional integration, supported by sustainable financial mechanism and policy initiatives. The integrated system is expected to generate modal shift and make public transit a preferred choice to commute. To support the urbaneconomy, transit accessibility and mobility are important. SMC is already in process of developing a Surat Comprehensive Mobility Plan. 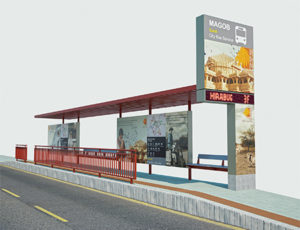 Taking long term sustainability perspective, the City has decided to give priority to improve public transport infrastructure with a holistic approach. Surat had already proposed an Integrated Multi-Modal Public Transit System. The various points of interchange between different transport modes have been identified as potential nodes. The vision is to integrate the various transit modes with activity zones at each of these interchange nodes. Hence the various nodes of the city get interlinked with better transit facility substantiated with commercial, institutional and entertainment activities.

To facilitate seamless transfer, five interchanges have been built (10 more under construction). The buses have central doors on both the sides so that passengers can access bus stations for all three types of services. Fifteen locations have been identified and planned, which will increase with the upcoming Metro services.

To support the operations of the bus systems – interchanges, terminals and depots are being built. A total of 15 interchanges and 14 depots are proposed in overall plan. The interchanges, depots and the terminal shall create urban nodes around the transit facilities and support in decentralizing the city. 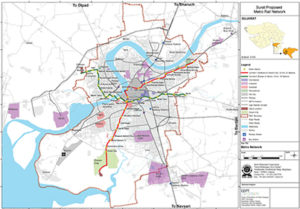 Since last five years, Indian Railways, GSRTC and SMC are exploring development of passenger facilities at individual strength near Surat Railways Station/GSRTC terminal. Government of India in July 2015 expressed an interest in developing a Multimodal Hub, utilizing locational opportunity of contiguous land parcel of three parties and centrality of their passenger services.

Surat is exploring an ideal opportunity for developing a multimodal hub at the railway station area, which can be directly connected to regional services (i.e. train and regional buses) as well as urban public transit systems (High mobility bus corridor, bus rapid transit system, city bus service). Currently, there are about 2.5 – 3 lakh users of regional services with a potential of 80% transfers to/from public transport services. This is expected to grow in future to 4 – 4.5
lakh regional passengers per day and 1 – 2 lakh new users on account of development of Hub.