Experts from the Indian Institute of Science have come up with several technical measures that can be adopted to transform the city’s traffic situation. The experts are of the opinion that the implementation of sustainable transport policies will decongest the Bengaluru traffic and mitigate emissions from vehicles. 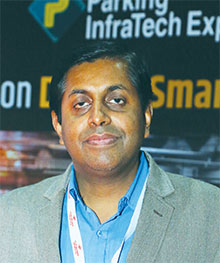 Bengaluru, has been a subject of mockery when it comes to traffic woes. A team of researchers from Indian Institute of Science (IISc) has recently sent a proposal to Bengaluru-based Member of Parliament Tejasvi Surya to put an end to the traffic woes in the city, owing to his keen interest in understanding Bengaluru’s traffic situation and finding ways to end the chaos.

According to a study- ‘Simulation Study of the Elevated Corridor Project’ and the ‘Climatrans Report – Sustainable Transport Measures for Liveable Bengaluru’ by Dr. Ashish Verma, Associate Professor, Transportation Systems Engg. (TSE), Indian Institute of Science (IISc) and his team has suggested several technical measures that can be adopted to transform the city’s traffic situation.

The Bangalore Metropolitan Region (BMR) is swiftly urbanising with a 584% increase in the city’s built-up area in the past four decades, and has about 6,000 km of the road network for an area of 8,005 sqkm. The unprecedented growth in urbanisation and economy has resulted in the growth of private vehicles that ply on the city’s roads leading to chaotic traffic conditions. 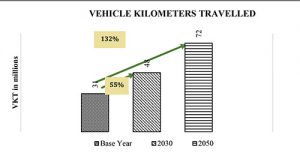 The study by IISc shows a comprehensive transport sector emission mitigation framework, with various scenarios based on a comprehensive data and modeling approach, along with Business as usual scenario (BaU).

VKT increased by 55% and 132% for 2030 and 2050, respectively concerning 2008 in the BaU scenario. This increase would result in more fossil fuel consumption that, in turn, would lead to greater emission leading to an unsustainable and unlivable situation in BMR. Emissions are estimated using factors for conventional vehicles and electric vehicles for CO, HC, NOx, CO2, PM pollutants.

Although Metro rail does not directly emit pollution, the electricity generation process involved in running the rail does so. These emissions are called indirect emissions, which are attributed to the case study of Bengaluru. The emission levels of other local pollutants such as NOx and PM2.5 are also likely to increase extremely in the BaU scenario unless proper mitigation measures are implemented.

Previous: Data, Data & Data
Next: The Future of Mobility: From Roads to Rails