From 1988 till 2004, the operations of Sydney Ferries were managed by State Transit Authority of NSW (STA). STA was, and still is, mainly a bus service operator. As on date, STA manages a fleet of 2100 buses and operates 15000 services every day. Sydney ferry network, in comparison, was small and it could not receive the individual attention it deserved from STA. Problems such as low patronage, poor fleet availability, declining fare revenue and route duplication by buses kept increasing. At one point in time, it was even argued that these costly services were an environmental hazard and should be replaced by bus services.

To bring about a level of efficiency and deliver the attention ferries deserved, the section of STA dealing with ferries was hived off as an autonomous unit in the year 2004. At the same time, it was also corporatised as a State Owned Corporation (SOC). This was done to bring about increased accountability, more efficiency in operations and reduced losses on account of revenue shortfall. The assumption was based on the fact that the new entity, while continuing to be government owned, will now be financially scrutinised like any other private entity.

But apart from providing a new regulatory and management structure, things continued to deteriorate. As in the case of RailCorp (the entity which provides heavy rail services in the Sydney region), the newly formed Sydney Ferries Corporation (SFC) was a ?non-profit providing corporation?. No dividends were expected to the government from this corporatisation, nor was it expected to pay taxes. This seriously dented its capability as a financially efficient and accountable entity. At the time the corporation was created, it was incurring losses and carried a $50 million debt.

Subsequent to two fatal accidents in the year 2007 in which four passengers were killed, an inquiry was set up to look into the reasons of what was going wrong and what could be done to make the operations of Sydney Ferries safe and efficient. The report submitted by the inquiry committee was highly critical of SFC on many levels including fare levels, service design, gangway design, financial management and institutional structure. It strongly recommended the replacement of the ageing fleet and handing over the day-to-day operations over to a private sector operator. It noted that the SFC could never operate like a free enterprise essentially because it provided ?a social service which is not likely ever to be profitable?.

As a result of this, last year, a consortium of private entities was appointed as the operator and maintainer of Sydney Ferries for the next seven years. This consortium, called ?Harbour City Ferries?, is a partnership of the French multinational, Veolia Transdev and Transfield Services. This is a franchise O&M contract (fee based) with roles related to the vessels, the routes and the fares, with the wider network remaining the responsibility of the NSW Government. Veolia Transdev runs public transport (including Rail, Bus and Ferry services) in Auckland, Brisbane, Perth and Sydney. Interestingly, in addition to the regular O&M of the service, the consortium is also allowed to recommend new routes. 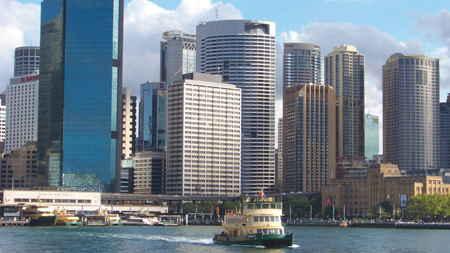 The state of New South Wales long term transport master plan released last year recognises the importance of ferry services not only for the tourism market but also as a symbol of Sydney. As already mentioned, a franchised private operator has been taken on-board to bring about service quality and efficiency improvements. As ageing fleet has been identified as one of the most crucial problems, the plan also includes a fleet procurement and wharf upgrade programme.

The Sydney experience informs us that operating an efficient ferry network is challenging. Challenges are manifold and on multiple fronts. As a public transport mode, operating ferries is more complex and difficult than bus or rail network. On that account, any ferry network needs to be carefully integrated with other modes of public transport. Any duplication in routes by competing modes can severely affect the feasibility of a ferry operation. Design innovation and technological advancement are also important to enable an environment friendly and modern operation.

The Sydney experience informs us that operating an efficient ferry network is challenging. Challenges are manifold and on multiple fronts. As a public transport mode, operating ferries is more complex and difficult than bus or rail network. Any ferry network needs to be carefully integrated with other modes of public transport. Any duplication in routes by competing modes can severely affect the feasibility of a ferry operation.

A modern operation depends a great deal on innovative wharf construction and vessel procurement, both of which are capital intensive. For this reason, feasibility of a ferry operation in any city cannot rely on fare-box collections alone. At the same time, we have also seen through the Sydney case that ferry operation can create a medium to appreciate a city?s urban form and architecture, and in doing that, it can acquire an iconic status in itself. In a creatively but carefully designed operation, ferries can have the dual role of public transport system as well as provider of an enjoyable urban public space.

While putting a monetary value on such qualities is impossible, the Sydney experience also teaches us that iconic qualities alone should not be used to justify an inefficient, unsafe or increasingly loss making operation. It is paramount that financial and institutional setups ensure an efficient operation which minimises reliance on tax-payers money.

Previous: Expressways and Highways: Mumbai?s Dangerous and deadly connections
Next: Bangalore?s Civil Society:Designs and develops a road while the government funds it