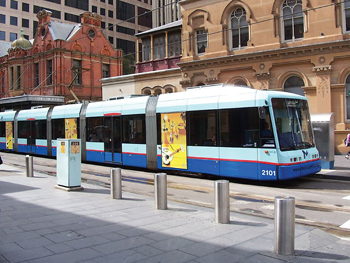 The New South Wales provincial government in Australia has announced a $1.6 billion plan to run trams (light rail transit) on a 12km stretch. As per the plan almost half of George Street in Sydney?s Central Business District will be restricted to just pedestrians and trams. The government hopes to reduce traffic congestion in Sydney and introduce a fast and attractive public transport option through the plan. The government?s budget has allocated $25 billion for the city?s transport over the next four years, out of which 56 percent will be on public transport while the rest will be on roads. The tram would be street based instead of being underground, thus saving hundreds of millions of dollars. It would carry about 9000 passengers per hour in each direction and cut down travelling time during peak hours by about 10-15 minutes. The government also plans to improve bus services and make them more efficient to decrease the use of private transport. These include improvements to interchanges, more cross-city routes and higher priority for buses. As a result, about 220 fewer buses would enter the city?s roads per hour compared to a normal figure of about 1500 buses, thereby decreasing congestion on the roads. Business and residents in Sydney are estimated to lose business worth $5.1 billion every worth which is expected to increase to $8.8 billion by 2021.

Previous: ITS implementation is great value for money
Next: Manish Poudwal conferred with Indian Achievers Award