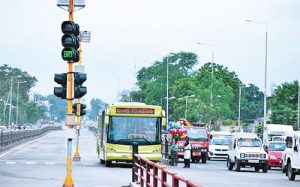 Indore is catching up with the demand to upgrade its traffic management system with a smart and efficient one. Speaking more about the upgradation of the system, Aditi Garg, CEO, Indore Smart City Development Ltd explains, “We are going to integrate traffic signals at 50 junctions with Adaptive Traffic Control System (ATCS), which is a part of ITMS. The radar-based technology hold records like density of vehicles on lanes and accordingly we will regulate the traffic signals on each road that are connecting at a junction.”

These signals will detect red light and speed violation, along with ANPR in place, and all this will be controlled through a dedicated monitoring control room.

List of these spots include MR-9 Square (Robot), Khajrana, Shreemaya, Bata Square, Nandlalpura, Rambaugh, Marimata Square, Ghandhi Nagar (SC), Patnipura, Dargah T Square, Home Gard T, Pipliyahana Square, Niranjanpur, Chankyapuri, Futtykothi, Bhourasala square among others. Garg further adds, “Each of these junctions will have a set of cameras which are in sync with traffic signals and will alter the time duration as per the traffic density.”

With the ATCS system in place, manual intervention is not required. Besides, the police department can use this system for law and order purposes. According to Garg, the tender for the project is already floated and work will commence soon.

Greater Visakhapatnam Municipal Corporation (GVMC) is implementing ‘smart signalling’ system across the city as part of the ‘Smart City’ initiative. Among the smart signalling initiatives, the Red Light Violation Detection (RLVD) system tops the chart. Cameras will be installed at 10 strategic locations, covering some of the busiest traffic junctions on the national highway.

The new system is equipped with automatic number recognition cameras that can keep eyes on multiple violations in several traffic lanes at a time and record it realtime. The e-Challan for a traffic violation will be sent on the phone or sent to the address on which the vehicle is registered.

Sharing more about ITMS system, N Durga Prasad, CEO, Visakhapatnam Smart City Ltd says, “The signalling system has three components— auto control with fixed cycles for each direction, manual operation (changing) by the personnel on duty and operation by vehicle activated cameras. The camera installed on the signal pole has applications that can detect the traffic flow and automatically alters the signal duration.” The signals can also be monitored from the primary Command Control Centre in the GVMC and the secondary centre at the Police Commissioner’s office. Another feature of the automatic signalling system is that it can be remotely operated from the Integrated Command and Communication Centre Control at the GVMC.