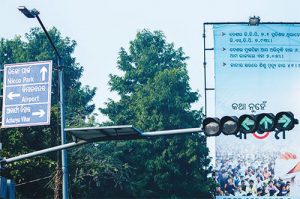 As a part of Adaptive Traffic Signal Control System project, signalisation of 58 junctions along with the provision of pelican signals (14) and blinkers (5) are being undertaken.

It is the latest technology in traffic engineering named Composite Signal Control Strategy developed by C-DAC (Centre for Development of Advanced Computing), a research and development organization under the Department of Electronics and Information Technology.

The system will not only collect real-time traffic data but will optimise the signal in real-time to reduce delays. Instead of a fixed waiting time, this traffic system will predict traffic volumes and adjust signal timings to match these volumes.

The installation of adaptive traffic signal control system has been completed at 43 intersections and is in the process at another seven intersections. The project on Pelican Signals and Blinkers is implemented by Envoys Electronics Pvt. Ltd.

Allahabad is all set to implement the traffic management system in the city. After installing the network of sensor-based CCTV cameras, the district administration will commence the second phase of ICCC. In the second phase of the ICCC, the footage from a network of over 1,000 CCTV cameras will be routed through different operating centres for better management of traffic in the city.

The feed from the CCTVs and the sensors attached to them will be used by different operating centres like the disaster recovery centre (DRC), viewing centres, command and control centres (CCCs), transit management system for city buses, environmental sensors and smart parking system.

The ANPR installed at several city junctions will help authorities intercept traffic violators. Using AI, the ITMS has been installed at 19 major crossings of the city, which will facilitate alignment of the traffic flow on a real-time basis. The traffic lights would function as per the flow of traffic.