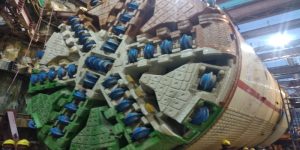 In this second part of the essay on underground construction, Dr Anbazhakan, Associate Professor, Civil Engineering Department, Indian Institute of Science, Bengaluru and Geethanjali Monto look at the scientific way of deploying the tunnel boring machine (TBM) to reduce cracks, cavities and collapse of structures.

Metro constructions are generally done below ground level. There are many underground structures such as the station and the tunnel through which the train runs. Most of the time, these structures are constructed considerably deep below the ground level and require deeper excavations for the subsequent two or three basement levels (-30 m, -50 m). The underground soil is a three-phase medium, with a mix of air, particles, and water. The bearing capacity of the soil system, which refers to the maximum pressure that the soil can withstand, depends on the relative proportions of these three constituents. 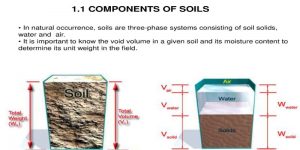 During excavation, dewatering is done by pumping, resulting in fluctuation and lowering of the water table. Because of this change in the water table and migration of water to other locations, the fine content in the soil mixes with water and flows along with water. The fines are washed away and only the bigger particles are retained. If a heavy load—such as vehicle movement—comes on those bigger particles, the soil skeleton collapses, forming cavities and settlements. This kind of cavity formation is very common in most urban areas due to several underground constructions. Understanding the three-phase soil system and its changes due to variations in the water and air content can help reduce such cavities. A knowledge of soil grain sizes and their potential transportation with water also helps avoid such issues. 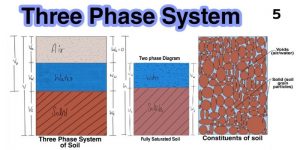 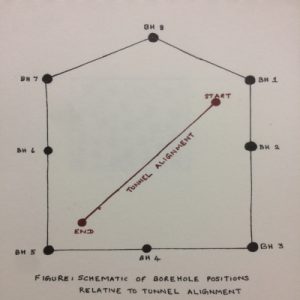 Another cause for cavity formation is when the mechanical action of the TBM causes an excessive force on the soil system in order to make a tunnel. Apart from the mechanical force, air pressure is applied during and after excavation to keep the ground stable. In general, the design team may provide the necessary TBM pressure guidelines based on the overburden pressure at each segment of the tunnel, considering geotechnical investigations and building loads. If the pressure applied during tunnelling exceeds the soil pressure around the tunnel section, it can cause undesirable vibrations, ground heaving, and collapse. When operating the TBM, pressure is applied to keep the ground stable. The exact pressure to be applied has to be estimated to avoid causing either excessive pressure above the soil pressure or less pressure (which causes instability in the TBM operations). So, obtaining proper data to estimate the pressure applied at each tunnel rig during TBM operation is essential to avoid the above consequences. However, due to the built and complex urban environment and the conventional boring data used to synthesize subsurface layers along the tunnel, there is an unrealistic match with the ground condition. This leads to excessive vibration and heaving, followed by collapse of ground and ejection of drilling mud along the tunnelling area. Such problems can be minimised if proper investigation is done to understand subsurface layers.

Before a metro railway line is constructed, geotechnical investigations are carried out. Boring is done at selected locations. A 150 mm borehole is drilled at available locations, which are generally away from the metro alignment. It is not possible to drill a borehole at the tunnel alignment section. Based on this, geotechnical properties of the soil are obtained, which are then used to arrive at the soil pressure above the TBM. The pressure applied to drill a section using the TBM should be lower than the overburden pressure. However, due to field conditions, the pressure estimated based on the borehole location may not be similar to the pressure at the location of tunnelling.

It is generally not possible to arrive at the exact profile of the ground above the TBM using conventional drilling methods. To overcome this, integrated subsurface investigation (ISI) was developed in 2015 by Prof. Dr P. Anbazhagan. Detailed geotechnical data required for the project, site condition, time and space availability can be obtained through ISI. The method has been applied for different projects and was found effective in addressing different industry problems in complicated geological deposits and site conditions. Different in-situ tests are selected from a pool of most reliable in-situ tests in a systematic manner; the test results are processed and an integrated subsurface profile is generated combining all the test results. The final two-dimensional subsurface profiles or maps show the variation of thickness and stiffness of subsurface materials.

In ISI – drilling of boreholes, standard penetration test, laboratory testing of soil/rock samples can be combined with ground penetrating radar (GPR), multichannel analysis of surface waves (MASW) and micro tremor (MT) survey. GPR is employed to estimate the spatial variation of layers and to locate any heterogeneity and air cavity in the study area. MASW testing is done to obtain the engineering properties of the soil. To verify the thickness of soil and bedrock interface in the site, micro tremor (MT) survey using seismometer is carried out. However, a very limited number of these techniques are being adopted in India and the lack of adequate data is a hindrance in capturing the problem even in sophisticated numerical analysis.

Using this method, proper pressure can be applied during tunnelling operations, which can help to keep the ground stable without creating deformation or cavity formation and avoid unnecessary accidents. It also enables knowledge of the ground before excavation starts and determine whether there are existing defects or cavities. Even though several crores of money is spent on metro and underground structures, there is very limited understanding on how different underground subsurface layers respond to these modern structures. Site-specific exploration, understanding and modelling can help to reduce such issues instead of using imported knowledge gained in a different geological terrain.