There are 13,900km of completed highways projects under tolling in India, out of which 7201km are under private tolling (BOT toll projects) while 6703km are under departmental tolling (Public Funded and Annuity projects). In FY 2012-13, toll amounting to over `92 billion (US$ 1.4 billion) was collected. NHAI BOT Toll projects are implemented by concessionaries who levy and collect the toll and in which the bid parameter is a premium paid to the NHAI or viability gap funding by the Government. Examples of these projects are six laning of Golden Quadrilaterial, NSEW, port connectivity and other highways of economic importance.

Earlier, PPP projects were taken up either on BOT (Toll) or BOT (Annuity). In November, 2009, bid parameters were amended. The bid parameters thereafter could be either a Viability Gap Funding consisting of a maximum of 40% equity grant or payment of a premium. 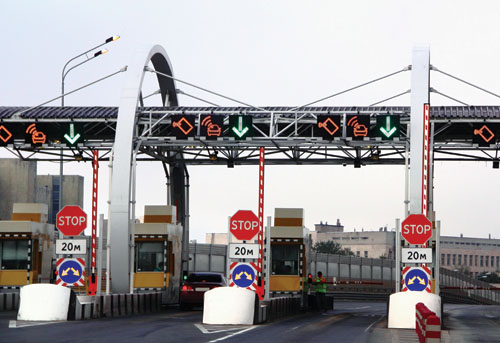 Toll projects in India mostly use existing alignments unlike other countries where green field projects are developed. Due to this, there is resistance from public to pay toll for such projects.

Due to at-grade intersections, entry/ exit to the project highway is uncontrolled. Hence open system of tolling was used in toll projects where the user crossing the toll plaza pays the toll for the full project irrespective of the length travelled on the project highway.

Earlier, toll was levied in India for temporary bridges (1964) and permanent bridges (1978/1992). Levy of toll for developed section of National Highways was introduced in 1997. New rules were introduced in 2008 and further amended three times so far. As concession agreements were signed at different points of time, the applicable fee rules (1977 or 2008) vary. Hence, rules and toll rates are not uniform. Although, latest fee rules provide for 60km spacing of all toll plazas, it is difficult to maintain such spacing. In open system of tolling, if the influence length of the toll plaza is more, it leads to higher rates.

There are problems in toll collection in some regions due to political and local people resistance. Fragmentation of habitat of people leads to inconvenience to the people resulting in resistance to payment of toll. Another cause of resistance by users is poor operation and maintenance of the project highways by concessionaires.

Due to semi-automatic toll collection (not electronic tolling), the dispersal rate of the vehicles is limited (300 vehicles per hour). Setting up of electronic tolling is in progress and it may take 1-2 years to equip all toll plazas with Electronic Tolling System and to establish Central Clearing House.

To begin with, NHAI used to collect toll departmentally by engaging ex-servicemen through Directorate General of Resettlement (DGR). Thereafter, toll plazas were awarded through open competitive bidding. Leakages were plugged by streamlining the bid process. After the introduction of e-tendering in 2010-11, the bid process has been further streamlined resulting in quantum jump in toll revenues by 35%.

From 2011-12, toll collection is being awarded through OMT (Operate, Maintain & Toll) contracts and 1400km have been awarded so far.

NHAI has decided to implement ETC on a pan India basis for all National Highway projects. ETC is being implemented through the use of Radio Frequency Identification Device (RFID) technology. Enabling provisions are being incorporated in the concession agreements for implementation of ETC in future BOT/ OMT projects. A new company, Indian Highways Management Company Limited (IHMCL), with equity participation from NHAI (25%), concessionaires (50%) and financial institutions (25%) has been incorporated in 2012. IHMCL is in the process of engaging a consultancy firm for forming a system architecture in line with international best practices. The firm will also assist with preparation of tripartite agreements between NHAI /Concessionaires, IHMCL and Toll operators. It will also develop a business model for agencies managing the ETC system. IHMCL is in the process of engaging agencies for distribution of tags, setting up of a Central Clearing House (CCH), ETC lanes at toll plazas and networking of toll plazas with the CCH.

Challenges in implementation of ETC

There are many technological issues such as road users not being used to plastic money. Multiple agencies use varied methods of toll collection. The other challenges are inter-operability issues in toll plazas and connectivity issues for remote areas. There have also been difficulties in implementing uniform ETC due to lack of enabling framework in existing concession agreements.

An array of options needs to be developed for project development including BOT (Toll), BOT (annuity) and EPC. Good quality and thorough project preparation and planning is needed to ensure efficient and effective project delivery. There is a need to move from the current “project” orientation to “service” orientation. While there has to be vigorous monitoring of output, there has to be greater flexibility in design and management as well. A statutory framework needs to be created for looking into PPP issues like Force Majeure and re-negotiations. There needs to be a common IT platform for traffic data, toll collection and charging. Travel across stretches managed by different concessionaires has to become seamless. Lastly, concessionaries should adhere to stipulated quality and safety guidelines.