The cheapest infrastructure in Turkey is opening

A new era for public transport

Safak Hengirmen Tercan, Head of the Environmental Protection and Control Department, Gaziantep Metropolitan Municipality, Gaziantep writes on how the lowest infrastructure in Turkey is opening a new era for modern transport modes. To make rail systems a viable and green option of public transport, the “recycling’’ of vehicles could be a cheap option, she says. 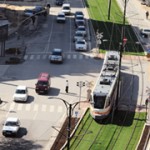 Gaziantep city in Turkey, home to 1,360,000 habitants and located very close to the border of Syria at the south-east, is on the course of the Historical Silk Road and at the intersection point of the roads connecting various directions. It has preserved its strength and importance throughout history.

With its robust industrial and economic structure, Gaziantep holds an important place in the Turkish economy. Its textile, food and plastic manufacturing sectors hold the top three places in the manufacturing industry in terms of employment capacity. The city is a leader – both for Turkey and the adjacent region when it comes to industry and technology. One of the major decision makers of the city, Gaziantep Metropolitan Municipality, regularly undertakes various projects to provide a better quality of life to its community and the visitors with a sustainable development approach.

Under this approach, Gaziantep started to prepare its transportation master plan in 2004. Based on the plan, and according to the Home Interview Survey results of 2005 (excluding two wheelers), the average daily vehicular trip rate per person is 0.49 in Gaziantep; more than half (54.08%) of the total urban trips are made by pedestrians (Table 1) and, the share of two-wheelers (bicycle and motorcycle trips) is 1.34% in total and 2.91% in vehicular trips. The average daily total trip (pedestrian and vehicular) rate per person is 1.07. 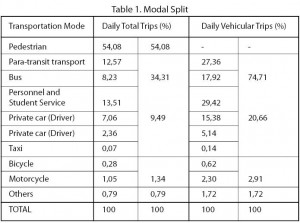 The transportation master plan results show that the city needs to construct a public transport system like rail system or metrobus to decrease the congestion in the city. The decision makers of the city wanted to have a railway system – a light rail system – to increase the city’s popularity. A stretch of 15km was considered in the first plan.

The Government Planning Organisation which has the authority and responsibility to give decisions concerning the railway systems in the cities, has some pre-requirements to build such systems – requirements that were not justified by the Gaziantep Transportation Master Plan. And to add to it, the municipality couldn’t find the necessary finance for a light rail system. Despite all the opposing ideas, the municipality started to construct the infrastructure for a tramway line in 2009 with some important modifications on the first planned line by way of inviting tenders.