India’s road traffic has reached a breaking point. In response, the Indian government has committed itself to expanding local public transportation. Today there are seven million vehicles in Delhi alone, including cars and motorized rickshaws — but excluding trucks. As part of this plan, rail-based transport will play a key role in inner-city traffic. Siemens has completed a number of key projects. 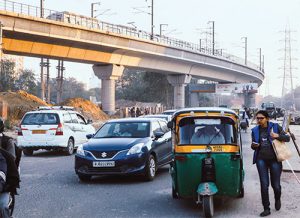 A few measures have been taken to manage the traffic situation in India. For instance, in Delhi, trucks may be driven through the city only between 9 p.m. and 6 a.m. However, traffic often comes to a standstill during the day, even on 12-lane highways. These traffic jams cause tremendous loss to India’s economy, because millions of people are forced to waste valuable work time. “The Indian government has recognized this problem and is now promoting mobility as an important component of the nation’s rapid future development,” says Amitabh Bhagwat, who is responsible for turnkey projects at Siemens in Mumbai. “It believes that the solution is an expansion of local public transportation and a departure from motorized private transport. It’s crucial to get people to their workplaces quickly.”

A lot has in fact been accomplished in the past ten years. In many major cities, all-new metro lines have been built in record time — over 200 kilometers in Delhi alone and 42 kilometers in Bangalore. An additional 530 kilometers are currently under construction throughout the country. In August 2017, the Indian government passed the Metro Rail Policy, which for the first time makes it a national goal to expand rail based transport as the backbone of interurban traffic. This policy also calls for networking various transportation systems. The aim is to have rail transport the majority of passengers, while buses, streetcars or light rail lines bridge the last mile on people’s journey home or to the workplace.

“Today, private bus and transport companies operate their fleets on the routes that are especially lucrative and widely used, between city centers and residential districts,” says Bernd Bonenberger, a local transportation expert at Siemens in Delhi. “So far there’s been nothing like a cooperative network.” To date, the lobby of the various bus and transport companies has been an obstacle to the construction of a multimodal traffic network consisting of various modes of transportation. But the new policy aims to end all that. Networking has become obligatory.”

Complete Package for the Private Sector

In recent years, Gurgaon has developed an ultramodern office and business district to which many thousands of workers travel every day. “Previously, the access roads were completely overburdened. It sometimes took an hour just to travel from your office to the next main road,” says Bonenberger. Siemens created an alternative to this bottleneck by building two metro lines, each one several kilometers long, to serve as feeders to Delhi’s main subway network. It was a complete package, comprising trains with depot workshop equipment, the electrification system, and the signaling systems, all made by Siemens. In the greater Delhi region, Siemens not only built the subway line in Gurgaon that feeds into Delhi, but is also expanding the entire Delhi Metro subway system. Siemens is also providing the electrification technology for 115 kilometers of new subway lines.

The Rapid Metro Gurgaon feeder line on the outskirts of Delhi transports 50,000 people every day and covers all of its costs through ticket sales. As Gurgaon continues to expand, the operators expect the number of passengers to go on growing. “The Indian government is now promoting exactly this kind of involvement by private companies in order to boost the expansion of subway networks,” says Bonenberger. “This is essential because, as an emerging market, India does not have the economic strength to enable its public sector to expand the local transport networks to the extent that is needed.” Another new aspect of this policy is that bidders have to submit their project proposals for review by independent experts. This too decreases the influence of the well-established transportation lobby.

The Indian government is also looking into reorienting urban planning through its Smart City initiative. The aim is to place residential districts, workplaces, and business centers closer together so that people don’t have to travel as much. This concept includes the construction of shopping centers located next to new subway stations.

The Indian government wants to move transregional traffic off the nation’s roads. In the years ahead, it is planning to build a network of express trains for long-distance transportation. Siemens will be involved in this endeavor on the route connecting Chennai, Bangalore, and Mysore. A completely electrified route will be built for long-distance freight transport in the next few years in order to decrease the use of diesel locomotives. The aim is to use improved signaling systems to enable trains to run at shorter intervals, so that the route is more effectively utilized. And that’s not all. The Delhi Metro is also participating in a new photovoltaic facility that will provide the subway system with green electricity.

Previous: Sustainable Transport Policies for Bengaluru
Next: EV Chargers Designed & Made in India, & Made for India