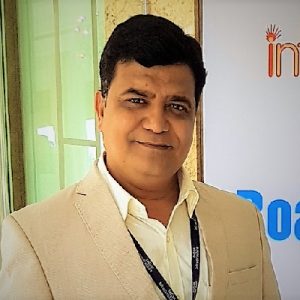 Road markings are the primary sign and signal for the driver as road marking guides, warns the driver to a disciplined and safe driving.

Nasim Khan, Senior Manager at Asian Paints PPG Pvt Ltd, states that India should open up its arms to the new technologies in the pavement marking systems and adopt various materials and techniques available worldwide.

The history of road marking dates back to 1911. Edward Hines, at the time the chairman of the Wayne County Board of Roads, came up with the idea of marking the center line of the road after watching a leaky milk truck make its way down the road, according to the Michigan Department of Transportation. Hines was posthumously inducted into the Michigan Transportation Hall of Honor for the idea in 1972. 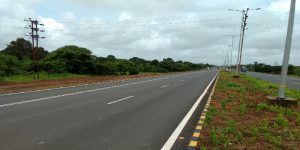 The first lined road in the United States was Trenton’s River Road in Wayne County, Michigan, which dates back to 1911.

Thermoplastic comes in a granular, blocks and powder form and irrespective of the form used for thermoplastic road marking, it is heated to a molten state. It is then transferred to a mechanical applicator to make the marking. On cooling, it forms a cohesive bond on the surface applied.

Road markings perform an important function of guiding and controlling traffic and serve as a psychological barrier and signify the delineation of the traffic path. It also channelizes the movement of the pedestrians and cyclists into the safe zones.

World over various transportation authorities in the US, Europe, Australia, New Zealand and a few other countries have made considerable changes to the pavement marking specifications after evaluating different pavement marking materials and their performance over a period of time. This has helped in choosing the best suited material for a particular region and providing insights into developing the performance based specifications for the marking materials. 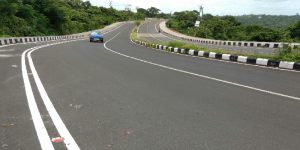 In India too, we require to critically look at the existing road marking specifications, evaluate and develop a performance based specifications. The same material may not perform similar on all roads and all types of site and climatic conditions.

In India, we have to evaluate and adopt two component MMA materials which are far more durable then the traditional thermoplastics. We have to promote Audio Tactile markings for better safety and profiled markings and Hi-Index glass beads for safety and Wet-Night visibility. Road Authorities and Consultants should be encouraging the road contractors to use different material and glass beads that provide extra safety during fog and rains.

Asian Paints PPG Private Limited is a leading player in the field of Protective Coatings, Powder Coatings and Road Marking Coatings. The company is a 50:50 joint venture between Asian Paints Limited and PPG Industries, USA. The high-performance road markings are specially designed to provide durability, greater visibility during the day and better retro-reflectivity in the night-time. Road markings are aids to control traffic by exercising psychological control over the road users. Road markings are important means of delineating the carriageway, to ensure safe driving. 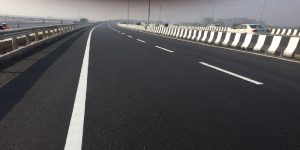 Durability is very essential parameter for the road marking coating which can perform in aggressive environment. The hot melt thermoplastic road marking brands like Apcomark and Thermoline are extensively used on major National Highways and Expressways.

Apcomark is the highly durable road marking which meets requirement of MoRTH 803.4 specification and Thermoline meets the requirement of BS 3262 / EN-1436 specification. Apcogrip is a unique primer for application of hot applied thermoplastic road marking material on the concrete surface. While these road markings cannot physically prevent the happening of a road mishap they serve as a psychological barrier.