The Pune Metro is Here! 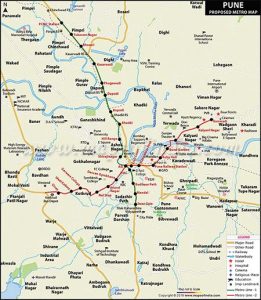 Another prominent argument centered around that has recently reared its head is the Metro alignment changed to go along the riverfront. In fact, because of the NGT petition, this argument sort of surpassed all others in the past few months in terms of media attention. The primary argument here is that any construction in the floodplain essentially messes with the flood carrying capacity of the river. But we have to understand that approximately in the 1.7 km stretch of the Metro that will traverse the riverfront, there will be only piers or columns occupying a part of the floodplain between the Blue and Red floodlines. This argument is actually making a direct argument against public transport system in a city. So while the argument focuses on the damage caused to the river ecosystem, it completely ignores all the subsequent environmental benefits of public transport to the city. The last argument against Metro is the disruption that is expected during the long construction period.

Many Metro projects today are employing pre- cast technology to complete construction in record time. While the foundations and piers are being constructed, the entire rail spans get ready in precast yards. This considerably reduces construction time. Gadgil explains, “What an elevated Metro needs is a 8m wide corridor to conduct all its construction operations”. Actually single span precast construction would be an even speedier process, but transporting these single spans on Indian roads is next to impossible. Hence these spans are broken down into segments and these are then directly assembled on site. This ensures that the entire construction is of good quality and site assembly requires minimal intervention.

While the precast construction will be fast, efficient and timely, it’s another matter if the Metro construction is held back due to legal petitions, resistance to land acquisition and protests.

Other valid arguments also include the need for an integrated public transport system that supports the Metro. Bus service and Rickshaws and their effective seamless integration with the Metro service are very crucial. Secondly, there is still some doubts being expressed about the alignment of routes. Are these routes the most suitable? Would these routes shift, if most recent traffic data is used? Historical study of such projects shows that establishment of a public transport route ensures faster development alongside it and thus increases ridership.

So Punekars, lets brace ourselves for eventful five years as we battle traffic and face issues. The project can bring higher mobility and thus higher potential for economic growth to the city.

Easing out traffic the easier way