The Third Eye: Managing the Traffic

Indian cities are trying to be Smart and Safe with the use of Video Surveillance and advanced traffic management systems. Preeti Swaminathan spoke to Traffic Police officials of various states to find out the systems being put in place for enforcement of speed and safety

We envisage our smart cities to be places where everything is automated through technologies such as artificial intelligence (AI), cloud, Big Data and analytics. However, one of the key components is surveillance — 24/7 round the clock monitoring of citizens and traffic.

The Maharashtra government, in a serious bid to improve traffic movement and crime detection has worked out a bouquet of initiatives including integrated traffic management system attached to CCTVs which will be subsequently integrated to e-challan. The state government has proposed 5,000 CCTV surveillance cameras to curb street crimes and traffic offences. The government will upgrade the existing network of 4,717 cameras and integrate it with the Mumbai Police’s ‘Dial 100’ project to lower the present response time of 12 minutes. Vinay Korgaonkar, Additional Director General of Police (Traffic), Maharashtra, said, “The objective of the project is to reduce the human interface to curb traffic violation with the launch of an integrated traffic management system.” The project being implemented by the state home department will eventually see 10,342 cameras.

Further, the government had launched last year the Mumbai Police Information System, which allows the police to share all internal communication on a secure internal server reducing the use of paper. The Automated Biometric Information System stores biometric data of all the arrested accused in a digital format. 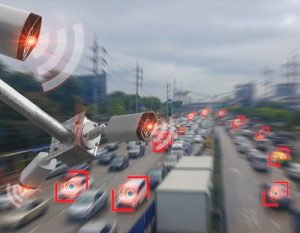 The key features of the ITMS project include non-intrusive traffic detection technology with 4D radars, signal synchronization based on speed and density of vehicles, and origin-destination analysis of vehicles for better traffic planning.

Speaking on the project details, Korgaonkar said, “An intelligent traffic management system will be an amalgamation of technologies like sensors, CCTVs, and 4D radars, which may be deployed. The project will ensure that the signals in a corridor will be aware of the traffic situation at each junction and optimize time through synchronization for smoother vehicular flow.”

There will be a signal and sensor at junctions. The sensors will detect movement, measure the density of vehicles, and use software to make a decision on signal synchronization. Entire Mumbai will be treated as one unit for smoother traffic flow, adding that based on work orders being issued, the project could go live in around two years.

The ITMS will reduce the need for manual policing and traffic regulation, and include an automatic number plate recognition capability and license plate number detection.

Application of ITMS in New Delhi

Delhi Police recently launched the e-challan system and e-payment gateway. The new system is likely to result in improved prosecution and better road safety standards in Delhi. The devices are of industrial grade and 4G-compliant with dual SIM facility and will have fingerprint biometric capturing capacity. They also have digital payment facility.

Further, the camera violation app is also connected to the e-challan system, so that the data is updated regularly and sent to NIC (National Informatics Centre) on real-time basis. This will help in giving the history of a vehicle and its driver to the official.

Previous: Accelerating Transportation Systems in India
Next: Due to ITMS a sense of order is developing on the Indian roads’