The Third Eye: Managing the Traffic

Taj Hassan, Special Commissioner, Delhi Police (Traffic), said, “The idea is to encourage people to have selfdiscipline. The move has been taken to ensure safe driving and stop road fatalities in Delhi. We are installing 3D radar based high resolution cameras at accident-prone spots. Our objective is to enhance electronic enforcement along with better road discipline and road safety.”

One camera on each side of both carriageways is being installed at stretches like NH-24 from Akshardham to Ring Road, Salimgarh bypass from ITO to Kashmere Gate, Outer ring road from Wazirabad to Bhalaswa Dairy, Bhalasaw to Wazirabad, Dev Prakash Shashtri Marge from Ratanpuri to Inderpuri, Dhaulakuan to Naraina, Arun Asaf Ali Road-JNU to Masoodur, Nelson Mandela road, NH-1 (GT Karnal Road), NH-10 Rohatak road, August Kranti Marg and DND Flyover. Seven cameras will be installed at two locations-three cameras at Lado Sarai and four cameras at IIT gate to detect red light violation.

“The system connected with these cameras will automatically decode and transfer data of violation to Delhi Traffic control room. The system will also generate e-challans along with a photo and send to the violators through SMS on their registered mobile number with the transport department. In case the number is not available challans will also be sent by post and email.”

The Delhi Traffic Police under this project will have to install such cameras on 96 identified red light and speed violations spots covering 24 junctions and 100 speed violation locations at several stretches of Delhi in coming months.

Speed detection cameras are likely to be installed at 100 more locations in the next four months under an ongoing project of the Delhi Traffic Police. Similarly, 96 cameras will be installed at 24 intrasections for monitoring red-light violations under the 3D radar-based Red Light Violation Detection Camera (RLVD) project,

The estimated cost of the RLVD leg of the project is Rs 20Cr and is likely to be completed by July. The entire project will cost about Rs 50Cr. According to Hassan, these cameras are being installed in the city as a part of an ongoing drive to bring down accidents caused by rash driving and over-speeding, “Reduction in cases of drunken-driving is one of the top most priorities for us.”

With the fines for traffic offences increasing multifold, there was a high possibility of violators contesting the fines. To avoid such instances, the Delhi government has directed officials to record offences using body worn cameras and digital cameras.

Nearly 626 body worn cameras has been distributed among officials to record the offences and to avoid any argument or violence that might ensue during challaning the violators.

Apart from the body worn cameras, violations such as red light jumping and stop line violations will be recorded using digital cameras. Offences will also be recorded on speed detection and CCTV cameras that have been installed by the department at traffic heavy crossings.

Along with Maruti Suzuki , the Delhi Police has also implemented City’s RLVDS and Speed Violation Detection System (SVDS). The objective behind this project is to remove human intervention from the current challan system and help reduce traffic violations and thus fatalities and accidents. With the RLVDs and SVDs in place, traffic management should get more stringent as well as efficient. Escaping a challan along the corridor with RLVDS and SVDS active will be difficult as the cameras installed will take a picture of the offender’s vehicle which will then act as proof and sent directly to them. 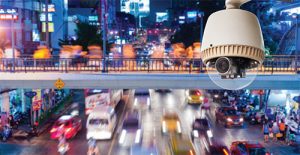 The initial phase of the system is being implemented on a 14km long stretch from Dhaula Kuan to Sarai Kale Khan. The stretch covers 10 high-density traffic junctions. This new system uses 100 high definition cameras to simultaneously capture red light violation, over-speeding violation, along with the licence plate of the offender’s vehicle. The system will transmit images to the central control room of Delhi Police and generate e-challan. Over 100 HD cameras have been installed across nine high traffic intensity junctions along the 14-km stretch.

The system will detect and record three prime violations – stop line violation, red light violation, and highspeed violation. The implementation of the new traffic system has been carried out as per the specifications provided by the Delhi Police. The project is expected to help reduce traffic rule violation and resultant accidents, along with providing surveillance.

The smart security system links the establishments and homes to the police control room, where a monitoring station keeps track of the premises and alerts the police regarding any threat to the homes and commercial establishments registered under CIMS. The police will be able to reach the place under threat within minutes and apprehend the culprits.

Previous: Accelerating Transportation Systems in India
Next: Due to ITMS a sense of order is developing on the Indian roads’