The latter automatically turns off the diesel engine when waiting at traffic lights, and while approaching and leaving bus stops.

Another means of clean transport that Archimedes has promoted is the electric vehicle. In Brighton & Hove, the city council and Elektromotive Ltd set up in February 2010 eight charging points on the city streets for charging electric vehicles on a trial basis. The goal was to encourage more people to drive electric cars and to build a clean and energy-efficient transport system. Of the eight points, four have already been installed in Bartholomews and Ditchling Road. Four more charging points will be installed at two other locations by autumn this year. Vehicle users desiring to charge their vehicles have to register with the road authorities. During the trial period registration is free for the first 25 applicants, as are parking and the electricity while the vehicle gets recharged. Users have to pay a small fee on completion of the trial period. There has been a steady growth in the number of registered users since the registration scheme started.

In March 2011 Aalborg and the company ChooseEV introduced ten new electric cars in the city. Ten families were selected to test the cars for three months. Over a period of two years, more tests will be carried out on the cars by 80 families.

Numerous traffic management measures have been carried out under Archimedes. The measures have aimed to reduce traffic congestion and commuting times, improve parking systems, and provide relevant, timely information to commuters.

In Donostia-San Sebastián, the public transport company CTSS-DBUS has implemented a Bus Rapid Transit System (BRTS) to enable its buses to bypass congested roads and reduce commuting times for passengers. The BRTS has special bus lanes along the two main traffic corridors – the East-West and North-South corridors, with buses running at a frequency of about six minutes during weekdays. A proof of the performance of the BRTS is that two bus routes have been certified to meet UNE-EN 13818 quality standards. CTSS has been able to achieve the UNE-EN 13818 standards by making considerable changes in the bus infrastructure in the city. Traffic lights have been programmed at 31 traffic intersections so that public transport buses get prioritised right-of-way. Implementing the traffic light priority measures have, on an average, led to the reduction of travel time on a bus route from 21 minutes to 15 minutes while another bus route has seen an increase of 2,000 passengers per day.

CTSS has also tackled another important area of concern for the city – security in public transport. It has fitted buses with security cameras, a measure that has considerably improved security onboard buses. Videos provided by the security system have enabled the police to detect and prosecute private vehicles that infringe lanes reserved for buses, and slow down public transport. The capacity of buses has been increased with the introduction of bigger 18m long articulated buses on two of the busiest routes. CTSS has also introduced smart card ticketing on the BRTS buses. Payment of tickets through smart cards ensures greater safety for both passengers, while at the same time ensuring that public transport employees don’t have to deal with cash. Further, smart cards have been shown to reduce boarding times on buses from 11 seconds to around three seconds. Two machines on each bus validate both – contact-less (70,000 in number) and chip contact smart cards (100,000).

In July 2010, Alborg set up a congestion monitoring system to reduce traffic congestion. The system guides motorists by informing them about congested routes in the city, and the times when the routes get congested. The data is presented to motorists on Google maps on the internet. The system reduces congestion volume on the roads as the drivers bypass the congested routes, and reschedule their travel to avoid the peak congestion hours. The system, set up by the Dutch automotive navigation systems manufacturer Tom Tom NV, is based on data collected from road users through GPS/GPRS units fitted on 10 special vehicles and 400 taxis in the city. 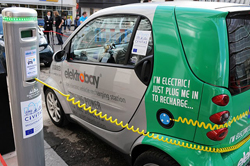 Beginning 2010, Iaşi has implemented green light priority measures for buses, trams and taxis to increase road space for public transport, ease congestion and thus, reduce travel time at 15 traffic intersections. To further resolve problems in public transport, the public transport company PTI operates a Dispatching Centre which acts as the communication and coordination nerve centre of public transport service in the city. The Centre has deployed radio transceivers aboard 30 transport vehicles with an antenna placed at two locations in the city to transmit and receive information. It also has two maintenance vehicles and 15 traffic safety inspectors. Bus drivers, traffic safety inspectors (and sometimes even the commuters) report to the Dispatching Centre, using walkie-talkies and telephones, all incidents which can cause traffic congestion such as vehicle breakdowns, traffic jams and road infrastructure problems. Based on the inputs, a dispatcher at the Centre sends maintenance vehicles with qualified service personnel to resolve the issues, or initiates other appropriate remedial action.

Under Project Archimedes, Ústí nad Labem aims to make the city safer by decreasing road accidents by 40 to 50% by 2012. Among the measures the city adopted towards achieving this goal was a road safety audit conducted on all the major roads in the city. The audit was carried out by a floating vehicle, fitted with a GPS device, which acted as a sensor to record traffic data. The vehicle recorded videos of each route and identified critical accident spots in the city. This information, along with records from the municipal database was used to form an “Integrated Traffic Vector Map” of the city. Based on the Vector Map, critical accident locations were identified, and a proposal to increase safety level in these locations was formulated.

For improving safety of disabled commuters, Iaşi installed audio warning devices for the visually handicapped at 20 traffic intersections in 2009. Next year, 50 bus stops were built which provided easy access to physically challenged people. And then, in 2011 the public transport company PTI installed hydroelectric lifting platforms at the back of 10 minibuses which could be used by disabled persons to board buses. The lifting platforms are operated via remote control by the bus drivers.

In June 2011, Aalborg – which has seen a steady decline in the use of bicycles over the years – established a ‘Cycle Motorway’ to decrease the use of private cars, and to promote cycling. The cycle motorway runs between the University of Aalborg and the city centre and has dedicated cycle lanes, priority measures for bicycles at traffic signals, signposts and other safety measures for cyclists. There is an automatic bicycle pump on the route and a shortcut for cyclists turning left so that they can bypass the traffic signal. There is also a bicycle counter along the route which indicates the number of cyclists using the road, the speed of the cyclists and the estimated time taken to reach the destination. The counter also displays the ambient temperature and posts warnings in case of snow and icy roads.

Holm adds, “Cycling is a sustainable and healthy way of transport. Therefore, we have put great emphasis on promoting cycling. Even though Denmark has a relatively high percentage of cycling compared to other European countries, our aim is to raise this share even more. The Cycle Motorway is an attempt in this direction. It is a corridor where a considerable number of students and other cyclists commute on bikes every day.”

Donostia-San Sebastián is testing a rather innovative electric cargo bicycle scheme which is being used by businesses for distribution of small packages, and for delivery of groceries from stores to homes. The bicycles, manufactured by Txita Txirrindak, have a payload of 180kg and a volume capacity of 1500 litres. They have 24 gears and an electric propulsion system which supports the manual efforts of the cyclist. Presently 150 such bicycles are available under the scheme for 300 users. City residents too can join the scheme. Since July 2010, the scheme has also been open to tourists. The aim is to eventually reach a monthly usage of 50,000 bikes, and increase the bicycle usage in the city by around 30%.

In Brighton & Hove, where increasing bicycle thefts are an area of concern, the city council piloted an initiative in 2010 called ‘Bikewatch’ to make cycle parking more secure, and to reduce cycle thefts. Secure cycle parking facilities were installed at 10 locations including eight on-street Pedal Cycle Parking Bays and at two off-street locations. Communication materials were distributed to residents in the 10 pilot areas to educate them about cycle theft and good cycle ‘locking practices’. The results of the ‘Bikewatch’ initiative are currently being evaluated.

Thus, the Archimedes Project has been instrumental in introducing clean fuels, providing non-polluting vehicles, reducing traffic congestion, promoting cycling and walking and providing commuters with easily accessible and vital information to help in their travel plans. Many of these measures, which started out as demonstration measures, will

continue to be a part of daily life in the cities after the project period. Summing up the achievements of the project, Anna Driscoll, Measure Leader, Archimedes Secretariat, City of Aalborg says, “The demonstration projects of Archimedes have implemented an ambitious blend of policy tools and measures to provide safer, more energy efficient, and comfortable transport for all, using a higher share of clean engine technology and fuels. The project has shown that we could have a better urban environment with reduced traffic noise and lesser air pollution.”

Previous: The Bullet train accident at Wenzhou
Next: Diesel Emission Abatement in India