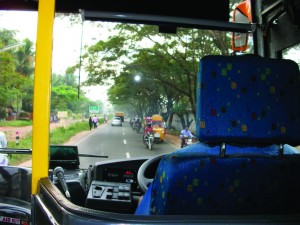 For the BMTC which operates its services in four shifts (day shift, night out, general shift, night services and peak hour services), the recruitment of the right staff plays a crucial role in optimising the running of its services. The effectiveness of over 2400 routes being operated from 35 depots and 47 bus stations, covering 50 lakh kilometres and transporting over 45 lakh passengers, depends on a foolproof recruitment process. The IT enabled process of recruitment, introduced in 2007, has impacted the testing procedure for recruiting drivers the most as all the aspects of testing — right from measuring the physical parameters of the candidates to testing the driving skills of the drivers – are now automated.

Before the IT enabled recruitment process was adopted at BMTC, the skills of the drivers were tested through a manual process. While the process was slow, the criteria and conditions for testing were not uniform for all the candidates. The allocation of marks to the candidates too was at the discretion of the testing authorities and allowed much scope of favouritism. The number of drivers tested per day by each engineer used to be very low as examining over 10,000 candidates for just one recruitment process was a tedious and difficult process in which considerable technical manpower was wasted. The challenge began with the procedure of short listing, testing, selecting and providing reservation to scheduled castes / scheduled tribes and other backward classes as per the constitution. Often, complaints were received about applications being rejected on trivial grounds such as the height and weight of the candidate, false certificates of reservation and incorrect marking for the driving test. The Indian Motor Vehicles Act does not prescribe any academic qualification for giving the driving licence. This added to the problem. And there were pressures on the testing authorities who sometimes themselves favoured undeserving candidates. This sent the message that one could get selected as a driver in the BMTC by lobbying despite not having the required driving skills.

This also resulted in the selection of incompetent drivers which led to an increase in the number of accidents, loss of life and payment of huge compensation to the victims. BMTC soon came to be known as “Killer BMTC”. This system also resulted in unsuccessful candidates filing court cases against BMTC which further delayed the selection process. The challenge was precise and clear – eliminate outside / inside pressure on the drivers’ selection process, help competent drivers get selected in the BMTC services by adopting advanced technology, and bring about transparency in recruitment and provide social justice. The BMTC did this by using automated driving test tracks. 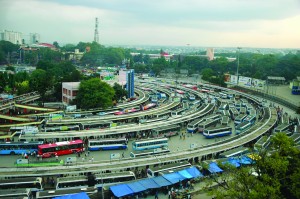 In the automated system, the candidates begin the process by filing the application online through the website www.bmtccareers.com. While a database of the candidates is created through this process, the candidates themselves take a print-out of the call letter which states the date of the test. Before the test is conducted, the candidates undergo a scrutiny of their credentials such as the educational qualification, details of driving licence, reservation as per law and other requirements. After scrutiny, a machine with a sensor fitted on a pole and connected to a computer, measures the exact height of the candidate, his weight and his body mass. The process is automated and the staff just facilitates the candidate to undergo height and weight measurements. The candidates who qualify in the physical test go on to take the driving tests. A Traffic Knowledge Testing Machine then tests the candidate’s knowledge of traffic rules and his colour identification ability, after he punches in the registration number in the machine. The machine displays objective questions, for which the candidate has to select one correct answer by making a selection on the screen. The information is directly fed into the computer which collates the data with the candidate’s registration number.

The drivers’ actual driving skills are tested through the Automated Electronic Driving Test System. Sensors are fitted on the ground on both sides of four test tracks installed specially for the purpose. Poles are positioned on these sensors. During the tests, light passes through the sensor every time the driver knocks down a pole. The sensor sends this information to the computer which deducts the marks for each pole knocked down. The countdown for each test – all tests are time-sensitive — begins when the sensor detects the first movement of the candidate taking the test. The time is calculated from then on. The computer software begins deducting marks for extra time taken and later, adds the information to the candidate’s testing record. All test tracks are monitored by computer operators. A control centre with servers, computer nodes, scanners and sensors controls the entire automated testing process.

The online recruitment process has reduced the utilisation of manpower from 20 officers to two officers, and from 80 employees to 20 employees per day. The procedure also avoids selling, receiving, entering and scanning of applications.

The tests for the candidates during the automated driving test process are:

Test No.1: This test is to gauge the capacity of a candidate to start a stationery bus and move forward on an upward gradient with least or no roll back of the bus from the line where it was parked. He also should not allow the engine to go off at the time of moving from the standstill position. The gradient used is approximately 20 degrees.

Test No. 2: The test is to assess the performance of the candidate while driving the bus / heavy passenger vehicle in a curve. The candidate has to drive the vehicle forward on the specified curved track road which is in the form of ∞. Wooden poles are placed on both sides of the track. If the candidate drives the vehicle on the track without disturbing any pole within a minute, he is given full marks.

Previous: Mobiles As The On Vehicle Monitoring Stations
Next: Bus Route Finder