Test No. 3: This test assesses the ability of the candidate to drive a bus in reverse on a curved track road. The candidate has to drive the vehicle from start line to finish line of the “S” curve. If the candidate drives the vehicle within three minutes without disturbing any pole, he is given full marks.

Test No.5: This test examines the candidate’s knowledge of the mandatory and cautionary road traffic signs and rules. Here, he is asked to read signboards shown in a room and is asked four questions. For every correct answer, he gets ½ mark. 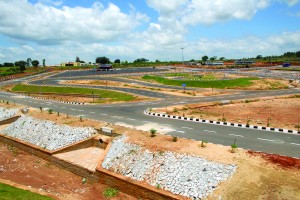 The testing tracks are designed for vehicles of lengths up to 33.5 feet. The entire test of 25 marks is administered independently by two divisional mechanical engineers as prescribed in BMTC’s regulations and its amendments. After completion of the test, the candidate collects the mark sheet on the spot. The accident rate has reduced continuously after the introduction of this system due to the induction of more competent drivers. This system is one of the reasons that have helped BMTC achieve the distinction of being the best performing state transport undertaking in Asia.

Other advantages of IT-enabled recruitment

In the laborious manual system of recruitment that was followed earlier, it was a practice to depute too many officers and employees at various stages of the process every time. Printed applications were sold in each district headquarter/centre throughout the state by a large number of employees. The filled-in applications were received and entered into the computer by 20 data entry operators — a process which took months. The scanned reports thus generated were scrutinised by 10 employees. 20 Officers and 80 employees were involved in the process of driver selection alone. For the recruitment of drivers, five divisional mechanical engineers – class-I junior officers – were withdrawn from the field every time. This affected the monitoring and maintenance of the operations of buses, resulting in operational losses.

On the other hand, the online recruitment process has reduced the utilisation of manpower from 20 officers to two, and from 80 employees to 20 employees per day. The procedure also avoids selling, receiving, entering and scanning of applications. The scrutiny and verification is done through computer – the created database is accessed as per the application details declared by the candidates. The process is quick, transparent, foolproof, sustainable and much more efficient than the process of manual recruitment.

The hosting and maintenance of the website, creation of database, working out cut-off marks, declaration of results, etc., are aspects that are outsourced to a PPP agency. The overall supervision is by BMTC.

The BMTC website furnishes the notifications for various posts, required qualification and reservation norms as per the Government Orders. After filing the applications online, the candidates can take a printout of the call letters indicating the date of their tests. A database is used for the verification of the candidature and credentials. The candidates no longer have to stand in long queues to buy application forms or submit them. Since the process is strictly merit based, the candidates need not approach anybody, nor bring any pressure – either internally or externally – to get selected.

Thus, the recruitment process in BMTC has become more transparent and accountable due to the introduction of IT based solutions. Representatives of other state road transport corporations and foreign countries have visited its test tracks and found the system efficient. The satisfaction of people, government, candidates and BMTC is a great benefit of this project.

Previous: Mobiles As The On Vehicle Monitoring Stations
Next: Bus Route Finder