The Bullet train accident at Wenzhou 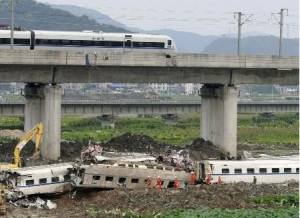 On July 23 this year, in the suburbs of Wenzhou, Zhejiang Province, at around 8pm (local time) a train travelling from Hangzhou to Fuzhou South lost power and came to a halt. Soon thereafter, a train travelling from Beijing to Fuzhou South crashed into the rear end of the stationary train. The last two carriages of the first train and first four carriages of the second train were derailed; four of these carriages fell off the viaduct. The 40 deaths and nearly 200 injuries made this the second-worst ever high speed train crash (after the 1998 Eschede crash in Germany).
The system failure was initially attributed to a lightning strike on the system. Five days after the accident, a signalling error was blamed: Namely that a signal failed to turn red and that staff failed to notice. Whilst there remains a debate as to whether technology or human management was to blame, the watchword for railway systems has always been “failsafe” and in either event, the system as a whole (technology and managers) should have sensed something wrong and ordered the second train to halt.