It has been taken up to achieve essentially the following objectives:

a) Accelerated, systematic and environmentally responsible development of peripheral areas to improve the quality of life of residents in the outer areas of capital region
b) Offer direct connectivity and shorter commuting time from outer area and adjoining districts to the major economic hub of capital region-Vizhinjam Port and thus help decongest the core city area by reducing transit traffic.
c) Provide adequate support infrastructure to spur ancillary economic activities to the major economic hubs at Vizhinjam (southern side of city) and Technopark- Technocity complex (northern side of city).
d) Provide facility to implement Rapid Transit Systems (Bus / Rail) so as to encourage and ensure that the stakeholders across the OAGC can use public transport as a habit.

The Outer Area Growth Corridor is a green-field project on the outer area of Thiruvananthapuram city on the eastern side, for a length of about 78.88km. 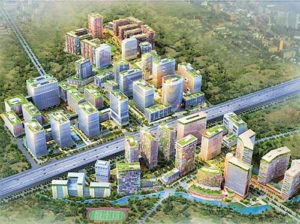 Trivandrum has various natural advantages as compared to many capitals and metro regions in India. Its undulating terrain, even spread and character of population that prefers to commute to the City from as far as 65km daily and a maze of almost radial arterial roads that diverge out of the City Centre to areas as remote as 70km from the City (that the proposed OAGC would intersect half way) are distinct opportunities that add value and encourage a project such as OAGC.

In the last National Census Survey of 2011, one of the notable findings was that the migration from rural to urban region in the Thiruvananthapuram district is one of the lowest in India. This throws up two factors:

With this in perspective, if a growth backbone intended to boost investment and employment opportunities without the stakeholders having to relocate can be provided, then this would set the benchmark for an Indian mode of development.

With this in view, the proposed Outer Area Growth Corridor has been conceived to include the following

a) A transit corridor interconnecting all National and State Highways leading Thiruvananthapuram with the upcoming International Container Transshipment Terminal (ICTT) at Vizhinjam.