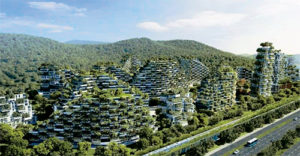 i. OAGC is initially being designed as a four-lane carriageway with six-lane structures (expandable upto six-lanes as per traffic warranty in future) freeway with controlled access through 10 meter service roads on both sides connecting the main carriageway with all leading radial and arterial roads of Thiruvananthapuram city and the other major district roads/ other district roads in the outer areas of the capital region.
ii. OAGC starts from National Highway no. NH66 (old NH 47) near Paripally (from Navaikulam) and end point is Vizhinjam Bypass/ NH66 (direct connectivity to Vizhinjam Port) with a link from Thekadda to Mangalapuram.
iii. The length of the OAGC is about 78.88km, i.e Trunk alignment from Navaikulam to Vizhinjam: 65.630km and Link alignment from Thekadda to Mangalapuram is 13.25km.
iv. The right of way (RoW) for the OAGC is 70 meters. RoW area of about 600 hectares shall be acquired for the OAGC.
v. The land use along the stretch is of mixed in nature with agricultural, residential, cultural and commercial.
vi. Major built-ups along the project road is limited to locations where proposed highway crosses the existing roads. Two major bridges, 13 minor bridges/ Viaducts, 14 PUPs, 36 LVUs, 21 VUPs, seven flyovers are proposed for the OAGC.
vii. The proposed OAGC alignment crosses an existing railway line near Balaramapuram.
viii. The initial screening report (ISR) for OAGC has been completed, the DPFR is in progress is expected to completed by end of July 2019.

b) A Special Investment Region comprising geographic area of about 400 sq km (spread along 2.5km on either side of the transit corridor) will have mixed land use, public and private land ownership with a detailed Master Plan and Planning Regulations to guide public and private development activities in a systematic and sustainable manner. Government also proposes to bring a special legislation in the form of SIR Act which will help improve the ease of doing business and investment competitiveness of the Project to the desirable global standards to attract maximum possible investment in employment generating economic activities in the project area.

c) Multiple “Development Zones” (within the SIR Area) which will act as Nuclei of economic activities and a strong growth driver to SIR and State. 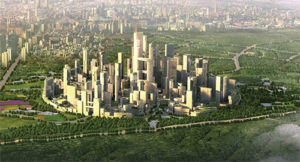 The location in the southern tip of India serves to give it considerable advantage in marine logistics being closest to the international sea route and the upcoming ICTT at Vizhinjam is expected to boost the trade related economic activities.

Proximity of the project area to the capital city helps in easier administrative facilitation which is crucial for the success factor for project.