The Urban Transportation system has been well received by the general public, media and so far about a million passengers have travelled in the metro since its launch. 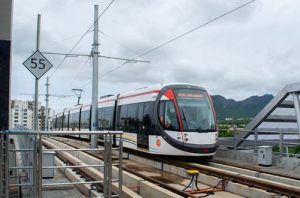 Starting from a greenfield, the priority section of 13km was completed within a span of 24 months and inaugurated by the Prime Ministers of India and Mauritius on Oct 4, 2019. The System is a first of its kind integrated LRT project being executed by an Indian company overseas and is one of the fastest executed Transit Systems in L&T’s track record. “ Our approach has been to provide a modern and distinctive solution by implementing cost-effective construction methods to enhance speed of execution with minimum disturbance to the people,” Jyoti mentioned.

The ‘Track to Train’ project not only marks a new high in Indo-Mauritian relations but also brings in huge economic advantages owing to the fact that such projects add significant value from India through a products and services perspective and enhances the image of India as a source of specialized technologies – perhaps a harbinger for more such systems in the region.

The Urban Transportation system has been well received by the general public, media and so far about a million passengers have travelled in the metro since its launch. Regular commuters include youngsters, elderly persons and even Parliament Members. Phase 2 of the project is progressing at a rapid pace and well placed to complete ahead of time.

Digitalization to the fore 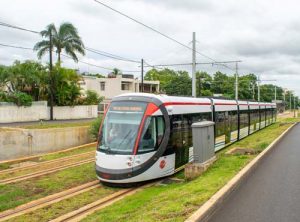 Use of mobile and web based solutions like RFI to raise, approve and monitor RFIs (Requests for Inspection) and TCO Work permit System to schedule and obtain clearances for working on track are both solutions ensuring quality of work and safe working environment for all workmen and staff engaged. EDMS, a project specific website is implemented to communicate and engage all key stakeholders, both internal and external on a digital platform. Other solutions like WCS (Wage Calculation system) help improve efficiency in administration of the project in terms of recording of attendance and automated calculations.

The project has had two major challenges; Geographical separation and Manpower. Set in Indian Ocean, the island nation is distant from India and hence planning is extremely critical with regard to skilled labor, Plant & Machinery, track specific materials and other long lead items.

Railways having been defunct in Mauritius since 1955, domain specific skilled manpower had to be moved from India At the same time, to bring in country value, a major portion of Mauritian workmen were domaintrained by L&T.