Have you ever wondered what the dirt kicked off by traffic running past you on the roads does to you every day?

When it comes to health on roads, we always blame the vehicular pollution. Environmental damage caused by vehicle fumes has, for quite some time, been a major issue with govern 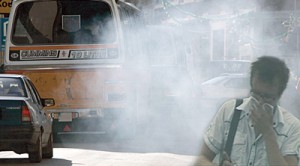 ments, vehicle manufacturers and road safety organisations. But there is another issue that demands equal attention, and that is the effect the dirt kicked off by vehicles plying on the roads has on any living being. Any idea how damaging this air pollution can be?

Air pollution is defined as the presence of one or more contaminants like dust, fumes, gas, mist, odour, smoke or vapour in the air, or outdoor atmosphere to be precise, for durations that prove injurious to human beings, plant and animal life or even property. The air pollutants are classified mainly into two: Primary pollutants and secondary pollutants. Primary pollutants are directly emitted into the atmosphere and include elements like particulates, SO2 and CONH3. Secondary pollutants, formed in the atmosphere as a result of photochemical reactions, include elements like NOx, Peroxy Acetyl Nitrate (PAN) and Acid Rain. Thus, the classification of the pollutants is done on the basis of their origin, state of matter and chemical composition.

These are finely divided solids or liquids. Since the larger particles tend to get settled quickly, they are called settleable or Dustfall particles (particles more than 1µ). Smaller particles, on the other hand, remain suspended for longer periods and hence, are called Suspended Particulate Matter (particles less than 1µ). The smallest particles, almost like gasses, are readily transported by wind currents to longer distances without getting deposited anywhere. While dust, smoke and fumes fall under solid particles, mist and spray come under liquid particles. Suspended Particulate Matter (SPM), most abundantly present in the atmosphere, is the cause of major concern for health. The SPMs can enter very deep into the lungs, severely affecting a person’s health. Since they are small in size, they do not settle anywhere and remain in the breathing zone of human beings. The settling velocity of this particle size range is very low and, therefore, the particles, composed of several toxic compounds, remain suspended for long periods. Metallic fumes, droplets of oil, tar and acid, black soot and local oil particles are some of the examples of these particles.

The urban travel demand in India is expected to treble by 2021 from approximately 760 million passenger km per day (pkd) to over 2,511 million pkd. The fallout of unplanned growth is increased congestion, a higher number of road accidents and deteriorating environment. The air pollution, rising due to increase in vehicles on the roads, has become a serious problem since the pollutants like Particulate Matter (PM10) in the air are found to be above the standard national level. It is reported that the roads and transport contribute hugely to air pollution in the form of dust rising from the roads and from automobile emissions.  Dust kicked up by vehicles plying on the roads may make up to 33% of the air pollution and consists of deposition of vehicle exhausts and industrial exhausts, tire and break wear, dust from paved road/ potholes and construction sites. The street dust contributes heavily to the generation and release of particulate matter into the atmosphere.

The dust environment – the clouds of dust formed by speeding vehicles – has significantly high volume of heavy metals, especially Fe (iron), Zn (zinc), Pb (lead) and Cu (copper). Generally, their levels increase with the increase in traffic volume in the urban areas. Controlling of street dust is a big challenge in the urban areas. This dust, with its heavy metal content, has a high potential of causing difficulty in breathing among both – children and adults who are either local residents or pedestrians, or even commuters. The poisonous smoke emitted by automobiles contains benzene and lead compounds, and wreaks havoc on the lungs and other vital organs, resulting in respiratory ailments. The resultant health effects of smoke range from various forms of cancer, bronchitis, bronchial asthma to impairing of the lungs. Quite often, people use mouse mask while driving and walking on the road as a precaution. Dust also has indirect effects on the health of human beings. It settles on dried food stuff such as rice, groundnut, maize, and when the moisture contents of these foods are still high, the dust dissolves in this moisture and gets absorbed and thereby contaminates the food stuff. It also settles on buildings, walls, roofs, window panes and doors causing mechanical abrasion and aesthetic blight.

Dust fall is that fraction of particulates in the air which settle down quickly by the virtue of their large size. It is relatively simple to measure this dust-fall as it does not require any specified sampler. A simple open top cylindrical container having a flat bottom with a diameter of more than 15cm and a height of about two-three times the diameter is taken. It is made up of any suitable material such as glass or plastic, and is kept a little above the ground on a stand with a protection provided by a guard frame. Half the container is filled with distilled water, and a small quantity of fungicides and algicides (such as CuSO4) is added to it to prevent the biological growth. The container is then kept on the stand in the open to allow the dust to settle in it, at least for a period of one month. In the areas of higher dust fall, the exposure may be reduced to a less number of days. Then, the container is removed from the frame and is taken to the laboratory for further analysis. The fractions of dust fall measured this way are: Total insoluble matter, Inorganic insoluble matter, Volatile insoluble matter, Total water soluble and Total dust.

The dust fall rate, reported as metric tons/km2/month, is calculated by taking into consideration the surface area of the collecting jar and the number of days for which the exposure was made.

Windbreaks can be planted or other plant covers adopted to reduce the speed of wind. This helps in preventing soil erosion and also in controlling the flying of dust. Fences can be installed, berms can be built, heavy trucks can be parked and construction equipment can be put around the pile to prevent the dust from blowing. These will act as wind barriers to reduce the dust from flying in every direction. It will, however, not be a substitute to watering programmes or the use of chemical stabilisers which are both common dust control measures. 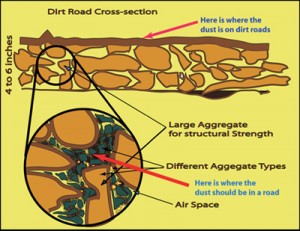 Though Pune’s population has grown from 17 lakhs in 1991 to an estimated 35 lakhs in 2011, its roads have not been developed in proportion to the population growth. Increasing number of vehicles and a poor public transport system which has not kept pace with the requirement of mass transportation, has thus worsened the commuting scene. A survey carried out by the air quality monitoring cell of Pune Municipal Corporation (PMC) has revealed that roads contribute hugely to the air and dust pollution of the city. Environmental Status Report (ESR), a report card on the health of the city, says that the SPM in Pune’s air is more than the standard national level. It also said that the dust rising from the roads is pushing the PM10 level, and the vehicles plying on the pucca roads blow 6,456 tonne dust every year while the dust raised by vehicles plying on kuccha roads is 1,229 tonne every year. India has norms to control vehicular pollution, but there is no norm related to road dust management.

LIGNIN is a complex organic molecule that acts as a binder or glue that binds the dust particles with aggregate on roads, making it an excellent natural product for keeping the dust down on dusty roads. Manufacturers of Lignin, a naturally occurring substance in woody plants, have performed extensive studies to test the impact of lignin on the environment. Results show that it is safe for the environment and is not harmful to plants, animals or aquatic life when properly manufactured and applied.

Method of application: The diluted raw lignosulfonate (one of the lignin products) is sprayed in light application on to dirt roads. Over time, the road surfaces begin to show improved stabilisation. The material is well suited for a variety of uses where pavement is too costly and dust conditions become intolerable, such as parking lots, driveways, and road shoulders.