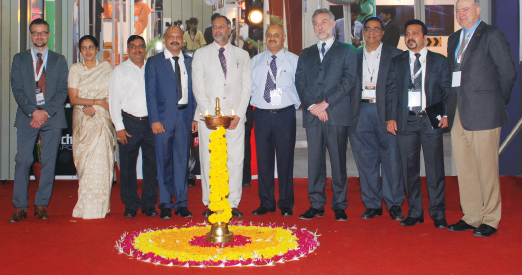 TrafficInfraTech Expo 2012 in Mumbai lived up to the industry’s expectations from it. Ministries, government officers from various State Authorities & PWDs, Senior Traffic Police Officers, serious buyers, and many other trade specific visitors kept the exhibitors on their toes. TrafficInfraTech takes you to the scene of action of India’s most looked forward to Traffic Show.

When over 78 exhibitors from India and abroad played host to some of the biggest names in urban development, traffic management, decision making and solution finding in the stream of traffic in Mumbai, it was clear right on day one that Virtual Info System (VIS)’s trade show on traffic, TrafficInfraTech Expo 2012 was successful. No wonder Dr Sudhir Krishna, Secretary, Union Ministry of Urban Development, Government of India observed, “All the exhibitors and stalls that I saw at this Expo, and the technology and the products displayed, are quite in line with considerations of planned transit oriented urban development. The Ministry of Urban Development supports such important events such as TrafficInfraTech Expo, and I complement the organisers for organising this event,” he added. (His full speech is given in this issue after the cover story).

The second edition of India’s three day long integrated traffic show and its three seminars held at Mumbai’s Bombay Exhibition Centre brought in traffic experts from all over the world. The Expo displayed over 120 national and international brands and its seminars took ahead brand TrafficInfraTech Expo which was so effectively introduced last year at New Delhi. Co- organised by Italy’s Fierabolzano and Afidamp Servizi srl, the VIS show, of which TrafficInfraTech magazine was the knowledge partner, had Gold sponsor in IL&FS and Silver sponsor in IRD South Asia.

RR Patil, Home Minister of Maharashtra had, in his message to the exhibitors written, “It is good to know that TrafficInfraTech Expo travels to Mumbai this year. I remember that it was a grand success last year at Delhi. Such trade shows bring all the stakeholders under one roof and it becomes easy even for the government officers to learn of the new technologies, products and solutions at a single place.”

Sunil Prabhu, Mayor of Mumbai too had extended his good wishes. Rahul Asthana, Metropolitan Commissioner, MMRDA said, “For any country’s progress, the most important component is the adequate traffic infrastructure. With the increase in capacity building, it is also essential to put in place traffic management solutions to provide safe and speedy mobility.” Creating awareness on various traffic related issues was a very important aim of the show.

Bipin Shrimali, Vice Chairman & Managing Director, MSRDC had written in his message, “All the support agencies have to work hand in hand to encourage development at the fastest possible pace. The land owners and occupiers of the government land must understand the need to reduce vehicles, fuel and noise pollution in our cities. Development of ring roads around major towns and cities like Pune, Auranagabad, Nagpur in the state of Maharashtra is another requirement for the safety of the urban population where younger population finds it thrilling to zoom around at high speeds. There is a need to bring in the above awareness and to act as a link between the development agencies and the user. TrafficInfraTech Expo is playing an anchor role in this regard.”

Sanjiv Kumar Lohia, OSD (Urban Transport) & Ex-Officio Joint Secretary, Ministry of Urban Development, Government of India, said, “The Expo acts as a goo d government to business interface. Such shows are essential as everybody can see the bigger picture, otherwise every one is working in parts and they are seeing, so to speak, parts of the elephant, and not the entire event.”

The constant flow of visitors from various parts of the country proved that brand TrafficInfraTech Expo is associated with credibility and delivers results. Said Satyendra Garg, Joint Commissioner of Police – Traffic, Delhi who was a panelist for the seminar on Safety during Highway Construction. “This is the second time that I have participated in TrafficInfraTech Expo and I have found it very interesting. I found a particular type of breath alcohol analysers displayed here very interesting in which the subject does not have to blow into

the analyser. In Delhi some crude methods are used to do the preliminary testing, like the subject has to blow into the analyser and sometimes we have to smell the drivers. Another product which we were looking for and found here is a speed measurement device which functions even at night, in essence 24×7. Most of our speed interceptors work during the day whereas most of the over speeding cases occur at night. I found some interesting products for this and we will be testing them at Delhi. Similarly, I found many other useful products here such as speed breakers, speed measurement equipment and so on. This show is very interesting. We get good products for traffic management here. I think the time has come for us to include more technology in traffic management so that the human aspect is reduced and we can concentrate better on enforcement.”

Previous: Quality,Variety of exhibitors and products are very good – Dr Sudhir Krishna
Next: The challenges were the ambitious timelines: Reshma Desai