Transjakarta: A Study in Success 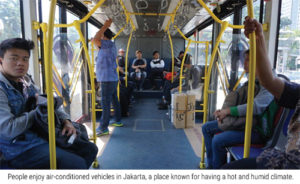 In January 2019, Transjakarta celebrated its 15th anniversary as the first BRT in South East Asia. Within 15 years, Transjakarta has become the longest BRT in the world and now boasts a daily ridership of 800,000 people. Its popularity and network are still growing.

To date, Transjakarta is the longest BRT in the world – spanning nearly 244 km, serving millions in the Indonesian capital. It was the first BRT in South East Asia with the first BRT in Asia was built in 2001 in Nagoya, Japan. Transjakarta’s popularity has helped transform Jakarta into a less car reliant city.

One of the reasons Transjakarta has grown so much is that it has integrated with bus and paratransit operators, allowing it to serve a larger region and diverse areas, otherwise not accessible with a large bus. Transjakarta has integrated with medium sized bus operators, small bus operators, and LRT (Light rail transit). The integration has allowed Transjakarta to take over routes, which has given customers continuity in their commutes and travel patterns. The integration with small bus operators has been particularly significant for ridership, with 13% of daily passengers coming directly from small buses. Currently, Transjakarta is working to integrate with Jakarta’s MRT (metro) and other bus services to further expand its coverage of the region and provide better service to its passengers.

Features for a comfortable ride 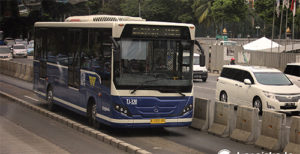 One particularly consequential result of the integration are the improvements in service among transit operators integrated with Transjakarta. Right now, the small and medium bus operators integrated with Transjakarta follow the Transjakarta Minimum Service Standards (MSS), which prohibits smoking on board, and requires that drivers follow speed regulations and stop at designated locations, among other enforced rules. These rules are enforced through fines and are successful in limiting or diminishing such problematic behavior. Each Transjakarta vehicle is equipped with air conditioning and special designated areas for elderly, pregnant women, and disabled people as well as spaces for women to sit to avoid harassment. Passengers have learned to utilize these areas appropriately.

Transjakarta has importantly remained low cost, with the price of each ticket at 3500 Rp (roughly $.30 USD) including transfers, thanks to its integration. There are no weekly or monthly passes offered but each ride costs the same, irrespective of distance or zone. Many of the important features added to Transjakarta’s system like having dedicated bus lanes and off-board fare purchasing have increased efficiency and thus reliability. Furthermore, by enforcing specific stops Transjakarta has created a cultural shift for riders, and drivers, who were accustomed to boarding or picking up passengers at any moment along the route. Passengers have adapted to new features like having to purchase tickets in advance. There is a mobile application that is available for free to all passengers, giving them access to departure and arrival times. The efficiency of the BRT has been translated across operators and passengers have adapted.

While Transjakarta has grown significantly and continues to grow, there remain crucial features that must be addressed. One vital aspect to its success is making sure that all people have full access to its vehicles and infrastructure. Accessibility to public transport consists of having both entrance and connection to the surrounding area and the stop itself. In order to make Transjakarta useful and usable by everyone, particularly vulnerable groups like the elderly, pregnant women, children, and people with disabilities, the stations must be accessible. Features that create or guarantee accessibility include at level crossing, pedestrian bridges, elevator facilities, and most important, sidewalks. Ultimately, pedestrians have to be at the top of the road user hierarchy, so that their needs are prioritized and always met. It is crucial that the city along with, DKI Jakarta Public Works Agency, the agency that controls the pedestrian facilities of Transjakarta, make accessibility a priority to improve Transjakarta’s service to its passengers. 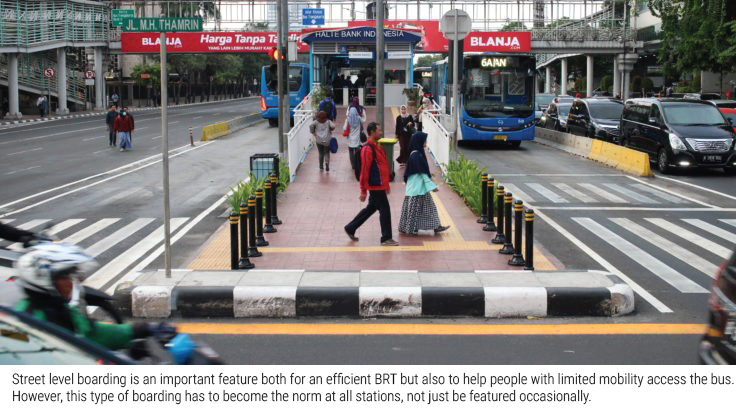 Transjakarta is adding roughly 10 routes every month to its existing service, further expanding its ridership. Jakarta unveiled a Metrorail (MRT) in 2019 that runs along the same route as Corridor 1 of Transjakarta. It was anticipated that the metro would compete with the BRT but both forms of transportation have had ridership increases recently. While only two stations along the MRT corridor are integrated with the BRT, fully integrated stations are planned for in upcoming phases. The MRT is scheduled to expand to another corridor which is expected to be fully integrated with Transjakarta and will focus on multimodal forms of transportation. Another exciting innovation is the planned electrification of buses.

Transjakarta is piloting electric buses to add to their fleet. Their ambitious timeline plans to develop a full corridor of electric buses by 2020 in an effort to combat pollution and climate change. Transjakarta plans to add more routes, more integration, and better vehicles in order to serve more people. In the next few years, Transjakarta aims to cover 70% of the people near transit in the Jakarta region, which will lead to providing service to over 1 million passengers daily. This increase will help Jakarta by decreasing congestion and getting more cars off of the road. Transjakarta serves as an example both within the region and worldwide. It demonstrates how thoughtful planning can lead to high quality and popular public transportation.