The bullet train project will have 21 kilometres long underground corridor. Around seven kilometres of this underground corridor is under the Thane creek. Of this, 1.8 km long section will be developed under the seabed, while the remaining part of the stretch is to be built under the mangroves marshland on either side of the creek. The corridor for Mumbai-Ahmedabad bullet train will be 508 km long with a speed of 320 kmph, the bullet train is expected to complete a journey between Mumbai and Ahmedabad in just around two hours. 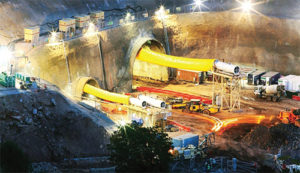 The Char Dham tunnel project will connect Kedarnath, Badrinath, Yamunotri and Gangotri at Uttarakhand. It will reduce travel distance from Dharasu to Yamunotri by 20km and travel time by about an hour. The construction will entail a 4.531km long, two-lane bi-directional tunnel with escape passage including approaches on Dharasu -Yamunotri section between Chainage 25.400km and Chainage 51.000km in Uttarakhand. The project is likely to be completed in four years.

The Rohtang tunnel will provide an all-season connectivity to Lahaul Valley in Himachal Pradesh. It will be one of the country’s longest road tunnels at approximately 8.8km. Being built in the Eastern Pir Panjal ranges on the Leh- Manali Highway – under the Rohtang Pass, the horseshoe-shaped tunnel is likely to be completed by 2020.

The development work is being carried out by Border Roads Organisation in collaboration with Afcons. The tunnel will reduce road distance by nearly 46 km and will save up to five hours of travel between Manali and Keylong. It has the capacity to ply 3,000 vehicles per day under any weather condition. It will also provide ample room for twoway traffic and is designed to cater to a maximum vehicular speed of 80km per hour.

The 14.2-km long Zojila Pass tunnel project in Jammu and Kashmir, with a Parallel Escape (egress) tunnel, will be implemented by MoRTH through NHIDCL.

Situated at an altitude of 11,578 feet on the Srinagar-Kargil-Leh National Highway, it will provide all-weather connectivity to the region. Considered Asia’s longest bi-directional tunnel, it will be an engineering marvel as it will be the first-of-its-kind in such a geographical area, with as many as nine curves. It will enable speed of 80 kmph, and will have the latest safety features such as a fully transverse ventilation system, emergency lighting, CCTVs, radio system, pedestrian cross-passages at every 250 metres, emergency telephones, fire-fighting cabinets at every 125 metres, and motorable cross-passages and lay-bys at every 750 metres.

The project will adopt state-ofthe- art methods of construction, out-of-the-box technical solutions, and real-time supervisory control and data acquisition. The carbon dioxide would be removed from the tunnel through a tower, seven times higher than the Qutub Minar. Construction time of the project is estimated to be seven years because of the difficult terrain.

The 6.5 km long Z-Morh road tunnel is being constructed near Gagangair in Ganderbal district of Jammu and Kashmir. Along with the Zojila tunnel (which is 22 km from Z-Morh tunnel towards Leh) the Z-Morh tunnel will ensure year-long road connectivity between Srinagar and Kargil.

The tunnel is designed for flow of 1,000 vehicles an hour at an approved maximum speed of 80 km per hour. The tunneling is proposed through NATM in view of the fragile Himalayan geology with 2022 the completion timeline estimate.