Nilesh Mundle, a pharmacy student, has advocated the use of turmeric oil extracted from discarded turmeric leaves as a possible bio-fuel for automobiles. His research paper was published in the International Journal of Pharmaceutical and Phytopharmacological Research. The details.

The production of crude oil has been decreasing all over the world with many studies indicating that the world may have hit peak oil (production) some years ago. With the overwhelming dependence of national economies on oil, and the constant northward movement of its price coupled with the fact that oil supplies are affected by volatile political situations in the Middle East and other parts of the world, research into alternative fuels such as bio-fuels, as possible replacements, has gained momentum over the last few years. An important player in this field could be the humble, ubiquitous turmeric plant, if research by Nilesh Mundle, a student doing his bachelors in Pharmacy from the Dr L H Hiranandani College of Pharmacy in Ulhasnagar, near Mumbai, comes to fruition.

Using the inexpensive steam distillation process, Mundle extracted oil from turmeric leaves and found the turmeric oil to have combustion properties quite similar to that of petrol. He also found that running two wheelers such as motorcycles on turmeric leaf oil does away with the need of adding a lubricant oil such as 2T oil to the engine which is always required to be added when the engine is powered by petrol.

Mundle, who hails from the town of Bhamni near Nagpur in Maharashtra, began his research about two years ago while studying for the third year of his Pharmacy course. He observed at Wahigaon, an area near Bhamni known for its turmeric production, that while turmeric was extracted from the roots of the plants, the leaves were discarded. Curiosity about the discarded leaves went on to become his inspiration for the research. He says, “Farmers in the area grow a lot of turmeric, a farm of seven acres has about three acres under turmeric production. But I saw the farmers never used the turmeric leaves after extracting the turmeric from the roots. Even animals do not eat the leaves, so they are a complete waste. I saw that when they burned the turmeric leaves, the leaves burned just like that, without adding anything, whereas when other leaves are burnt, you need to add some additives like kerosene. I realised that turmeric leaf could possibly contain some flammable compounds due to which it had a high degree of combustibility, causing it to catch fire so easily. Another thought that occurred was that maybe if the turmeric leaf could be a source of fuel, it would fetch the farmers a good price, and solve the problem of high rate of suicides by farmers in the area due to their debts and other financial problems.”

Mundle then proceeded to extract oil from the turmeric leaves at a steam distillation plant run by his uncle in Bhandara district. After the farmers extracted the roots for the turmeric crop, the turmeric leaves were cut from the turmeric plants, washed to remove the dirt and then put inside the distillation unit of the steam distillation plant. After the unit was filled to its capacity of one tonne, it was lit by igniting the fuel at the bottom. The fuel, in turn, boiled the water which generated steam. The steam was passed under pressure over the leaves, extracting the oil from the leaves, and the mixture of steam and oil vapours was then passed through a condenser. The thus condensed mixture was allowed to stand for some time to cool. The lighter oil floating on the top was then separated from the condensate by skimming it off. 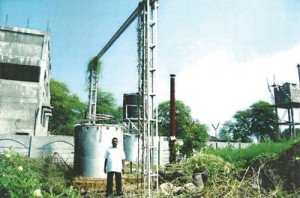 The turmeric leaf oil production process produces two other important products – biogas and vermicompost fertiliser. The residue of the leaves after the extraction of oil is mixed with cow dung and the mixture is left for six weeks after which it starts generating bio-gas. The residue, after the extraction of the biogas, is a slurry type mixture which is mixed with other components such as the rock phosphate, earthworms, dry organic wastes and water to produce vermicompost.

Mundle’s research into turmeric leaf oil has yielded several interesting results that are encouraging for its use as a bio-fuel. These results have recently been published in the International Journal of Pharmaceutical and Phytopharmacological Research. The oil, says Mundle, does not contain organic derivates such as alkaloids, carbohydrates, glycosides, tannin, phenolic compounds, phytosterol and saponin which are non-flammable and would have decreased the thermal efficiency of the oil. On the other hand, the oil was found to have terpenes which are flammable compounds, and which make the use of the oil as an automobile fuel much more attractive. Besides this, the turmeric leaf oil is non-corrosive, and does not affect the engines or the pipelines used for transporting it – a property it shares with petrol.

An important advantage of turmeric leaf oil over petrol is its comparatively better viscosity than petrol. It has a viscosity of 0.00876 poise while a mixture of petrol and the common automotive lubricant 2T oil, mixed in a proportion of 1000ml of petrol and 20ml of lubricant oil, was found to have a viscosity of 0.004353 poise. Due to this better viscosity, turmeric leaf oil possesses excellent lubricant properties which eliminate the need for using additional lubricant oils such as 2T in two-stroke engines – a mandatory requirement in two stroke engines using petrol. The oil is also considerably less polluting than petrol. In PUC (Pollution Under Control) tests carried out by the Maharashtra Motor Vehicles Department, for the same motorcycle, the quantity of carbon monoxide and other hydrocarbons emitted while using petrol as fuel was found to be 0.41% and 390PPM respectively, whereas the quantity of carbon monoxide and hydrocarbon emitted while using turmeric leaf oil as fuel was 0.39% and 70PPM respectively. (See Box). It is also much easy and less expensive to store turmeric leaf oil because it is considerably less volatile than petrol and can be stored at room temperature without the use of special storage facilities.