A fast, reliable and safe mobility system like RRTS will act as the backbone of urban and regional transportation in NCR reducing congestion and pollution significantly writes Sudhir Kumar Sharma, CPRO, NCRTC

According to a study by Centre for Science and Environment in 2017, traffic congestion on Delhi roads has worsened over the years. More than 5oo cars and 1,100 two-wheelers are added every day on the roads, says the report. The situation has come to a point that the non-peak hours are nonexistent.

Despite measures by way of creating Expressways, increasing the length or widening the road network and construction of number of flyovers/ grade separators, the poor traffic situation remains unabated. Such measures have not been effective so far and in fact have ended up creating bottlenecks or in best case shifting bottlenecks (a 12/8 lane highway has to merge into 4/2 lane road). Similarly, though Delhi Metro has spread its routes to the Delhi suburbs, it is not able to do justice to regional commute with the longer distances taking a lot of time. The existing public transport systems are limited, unreliable and slow and fail to provide attractive alternative to private transport.

The result is that the modal share in regional transport has become skewed for public transport, which has deteriorated to about 35% and is further reducing every year. The economic loss due to congestion in Delhi is around Rs 60,000Cr annually as estimated in a study done in 2017. 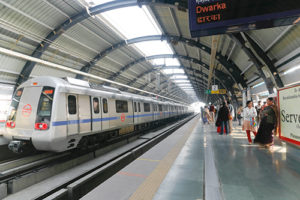 The only way to handle the current situation is to develop a long term integrated multi-modal mobility strategy for the region as a whole. India adopted this idea of holistic regional planning that was reflected in the Functional Transport Plan for NCR – 2032 issued in 2005. The Plan recommended various solutions to decongest Delhi by creating an integrated mobility network that includes the Kundli-Manesar-Palwal Expressway and Kundli-Ghaziabad- Palwal Expressway to keep the commercial vehicles away from Delhi. It has also elaborated the requirement of the Regional Rapid Transit System (RRTS) Corridors as one of the most critical mobility networks that will enable uniform & sustainable development in NCR and reduce permanent migration to Delhi considerably while facilitating growth of various urban nodes such as Gurugram, Modinagar, Ghaziabad, Manesar, Sonipat, Kundli etc.

The RRTS is a rail based high-speed transit system with a design speed of 180 km/ph and an average speed of 100 Kmph. Once operational, it will be the fastest, most comfortable and safest mode of commuter transport in NCR. A total of eight corridors have been identified for creating high speed RRTS links in the NCR, of which three corridors, Delhi- Ghaziabad- Meerut, Delhi-Gurugram-SNB and Delhi-Sonipat-Panipat are being taken up for development in the first phase. The three corridors will converge at Sarai Kale Khan in Delhi and will also have seamless integration with other modes of transportation, such as Metro Stations, Inter State Bus Terminals, Airports and Indian Railway Stations.