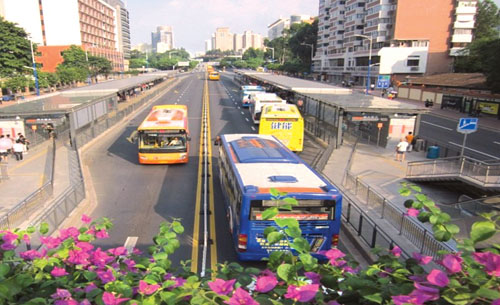 With BRTS and the Government’s emphasis on detrailing in specifications for buses, the perception for bus based transport system has changed in India

The Ministry prepared the Model Detailed Project Report to enable the cities to prepare DPRs about their bus requirements under the JnNURM scheme on their own without taking help from consultants. The Model Purchase Document was published to enable the cities to purchase the buses from the bus manufacturer. The Model Operators Agreement gives guidance on how to operate the buses in a sustainable way. These are the four things the Ministry found are essential to make the overall bus system sustainable.

UBS grew out of the need for having buses in cities, specifically designed for urban services. Recommendatory Urban Bus Specifications (UBS) were released by the Ministry of Urban Development (MoUD) in 2008, with supplementary specifications being issued in 2009 for ITS. 14400 city buses were procured by 63 cities under JnNURM launched in January 2009. The recommendatory UBS became mandatory for purchase of buses under the scheme. The floor heights for the different variants of buses sanctioned under JnNURM are:

The initial buses procured under the scheme had some problems. There was no standardization of the buses. In the earlier scheme, almost twenty seven variants were found in the buses. The Ministry received lot of feedback from the manufacturers that more the number of variants and prototypes, more are the delays in the overall procurement process. Also, the specifications were not detailed enough leading to lack of clarity in tender documents. Especially our cities are not that capable to understand the level of details in the bus. So we need to have tender level specifications which are more detailed. These issues caused a delay in development of prototypes and delays in procurement and delivery. Further, there were many maintenance complexities and ITS specifications were not integrated but launched later and retrofitted in the buses.

The more variants in the buses, the more is the requirement of different types of spare parts and different types of inventory requirements. So there were lots of complexities with the additional fact of bus manufacturers not being much interested in the maintenance of the buses. Since the specifications were not detailed enough for a successful tender process, the Ministry decided to go ahead with UBS II which is much more specific and detailed. A committee was formed in 2012 under S K Lohia, Officer on Special Duty, Ministry of Urban Transport. The committee comprised more than 30 members from MORTH, Ministry of Heavy Industries, SIAM, IABM, ASRTU, CIRT, ARAI, UMTC, CEPT, bus manufacturers, OEMs, ITS and other experts. The objectives laid down by the committee were to frame the specifications such that it would be comfortable for both the passengers and drivers.

The aim was to have better safety features and improved accessibility for passengers with disabilities. Specifications were to be standardized as much as possible and then give the industry the freedom to introduce innovations while manufacturing the new buses.

UBS II has many improvements over its earlier version. The specifications give much better comfort for both passengers and drivers. The safety features have been enhanced and accessibility for persons with disabilities has been improved. The fuel efficiency has been improved while ITS is now integrated into the bus along with other cutting edge technologies. Separate specifications have been drafted for buses in BRT operations because of the numerous design interventions that BRTS systems need. New variants have been introduced – premium, articulated and bi-articulated buses. Also, a road map for the future, for the gradual introduction of these features by bus manufacturers has been prepared.

A new variant – premium segment bus – which are quite advanced in comfort have been introduced, specifically to attract car users. These buses are 18m articulated and 24m long bi-articulated buses. While drafting the specifications for these buses, it was decided to give a kind of have road map for innovation and R&D to the industry. For this purpose, some timelines with specifications have been defined, which have to be implemented by 2015 and 2018. This will help the manufacturers to make the changes gradually, instead of expecting them to deliver the advanced buses immediately, which is very difficult.

There are different variants in the buses. The maximum floor height for standard, midi and mini variants is 900mm. Only cities and towns with populations less than one million are eligible for 900mm standard buses. New variants for the premium segment are standard and midi. For BRTS it is again 900mm floor height. 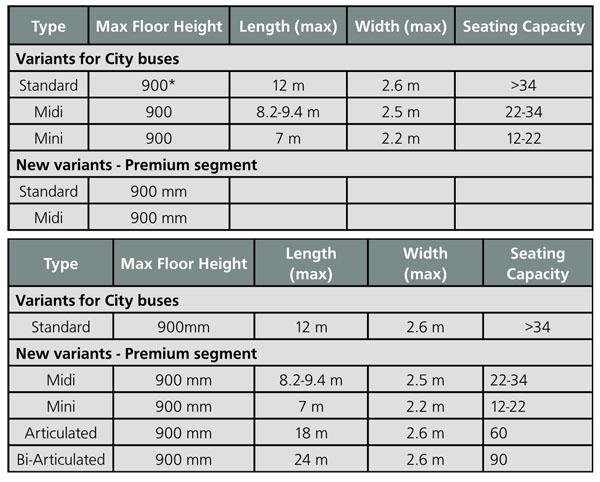 New variants for the BRTS segment could be mini and midi BRTS buses for smaller cities, plus articulated and bi-articulated buses. The new variant BRTS buses have 2-3 key new features. For comfort of passengers, air suspension system with kneeling facility has been added, especially for the 400mm floor height buses. The next feature is a wider gangway, with gangways being increased from 400mm to 700mm. To increase the gangway, a certain type of extension over the seats has been explored; it is hoped that the industry will come up with these kind of seating arrangements. The increased gangway may seem like a very insignificant feature but has a major role in bus operations; the increased width will reduce the dwell time of the buses and improve their overall efficiency.

While the basic features of a BRTS bus are the same as a normal bus there are two additional functional requirements which have to be met for BRTS. One requirement is uniform flooring inside the bus. This is very important for quick disposal of the passengers once they enter the bus. This will further reduce the dwell time pf the buses at the bus stops. Dwell time constitutes almost 20% of the journey time. Hence, by reducing the dwell time we can ultimately reduce the journey time and it will ultimately increase the efficiency of the bus system. Further, although the specific maximum floor height for BRTS buses is 900mm, it can be 600mm or 400mm but the condition is that the floor level should be uniform and there should not be any steps in the bus.

Previous: On-Road Parking Exploring Solutions
Next: ETC will bring uniformity of payment across all toll plazas and increase efficiency of toll collection