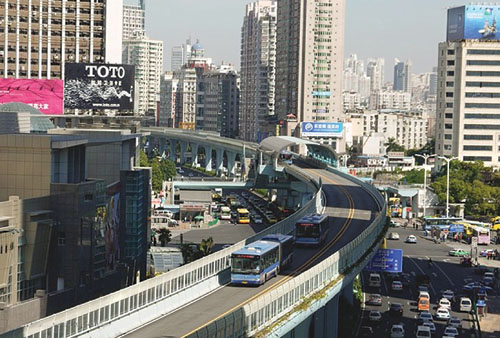 Both closed & open BRTS and kerb side & median side BRTS systems are being implemented in India, but since we did not want our buses limited to one system, all the options have been provided in the specifications so that in the future if a city wants to go with the closed system or open system, median station or a kerb side station, it can easily pick and chose the specification option it wants. The doors are much wider for the BRTS system – 1200mm – with each gate having a 400mm partition. So the total width is 2800mm as compared to 1200mm.

Another feature is the hydraulic power steering system with height and angle adjustment. A rear view camera with a view on the console has also been provided because , even if it is a 6m long or 12m long bus, it is just impossible to maneuver in the reverse direction. For better cooling and ventilation, there is a roof fan and key stage fan for the driver. The permitted noise level has also been set to be lowered in a gradual manner from, the current 84dBA to 81dBA in 2015. The current decibel level for premium buses is set at 75dBA. 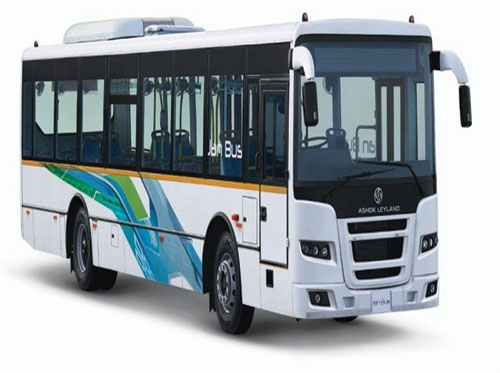 In the earlier specifications, there were many controllers for the on-board ITS – one for the camera for the driver, one for the PIS, and similarly many other controllers. However, It is not possible for the driver to manage all these controllers, leaving aside his primary responsibility to drive the vehicle. So there will only be a single controller in the new buses irrespective of the features in the bus.

MoUD has also added some very important safety features in the specifications: The bus will not move if the doors are not closed. A lot of debate happened on this particular issue. Now we are happy that industry is ready with such kind of solutions; a lot of accidents have happened earlier due to the absence of this feature. Another safety feature is the electro-pneumatic control rooms; there will be no manual operations.

The buses will also have many design improvements. For the first time there will be fully built buses which have passed design approval tests such as the rollover tests as per AS0522 specifications. Thus we will get structurally stronger and safer buses which have passed all design approval tests. Earlier it was not mandatory to go for the design type tests but now we are thankful to the bus manufacturers that they have come up with such a proactive approach for bus design testing.

Another important issue which is very important for safety, especially for women, is lighting in the bus. The buses should have more exposed area, wider windows and adequate lighting so that there are no dark areas. The minimum height of the window has been kept at 650mm and for bi-articulated buses between 800 to 1200mm. Also, in the earlier specifications the lighting level required was 30 lux whereas it has now been raised to 75 lux. There will be adequate surveillance cameras in inside the buses: for midi and mini, there will be one camera, for articulated bus there will be three cameras and for bi-articulated bus there will be five cameras. Other important features that have been added are mandatory door closure for movement of bus, electro pneumatic controlled doors and preferably disc brakes. 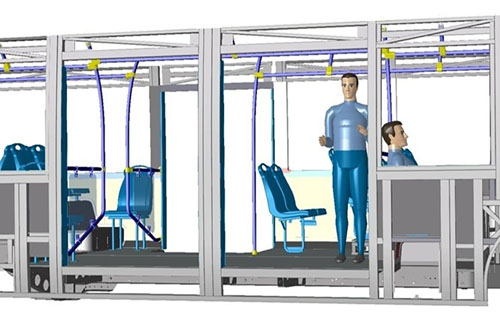 Higher acceleration plays a very important role for reducing the overall journey time. It leads a higher journey speed, better vehicle and fleet utilization, less cost of execution, and overall, less cost of operations. This small feature adds a large value to the overall operation.0.8m/s2 will be the acceleration for the standard buses and 09m/s2 for premium type buses. The engine location has been left for the bus manufacturer to decide.

The approach and departure angles of the buses are important factors in negotiating the steep flyover and our not so well designed roads and speed breakers. Both of these were earlier set at 7%. Now we have increased it to 8.5 and 9% respectively. We expect our industry to provide a higher life cycle for the buses, so this time the life cycle of the bus is expected to be 12yrs or one million km, whichever is earlier.

One important ITS feature that has been added is the multiplex wiring system which will be installed on all future buses. Its purpose is to simplify the complex wiring harness system in the bus which will also reduce the maintenance needs and maintenance costs. The ITS system needs regulated power supply for smooth functioning. There were complaints that there were breakdowns in the ITS system due to problems in power supply and malfunctioning of sensors. Through the multiplexing system, the console will receive diagnostic data from the electrical system, transmission system as well as the monitoring system. This will increase the vehicle reliability and again reduce the maintenance cost. Multiplex wring also eliminates fuses & relays

The second most important feature that was added was the Vehicle Health Monitoring and Diagnostic system (VHMD). This will have about forty indicators related to operation of the bus such as oil level, tyre pressure etc which will be monitored through sensors and which can be directly transferred to the Control Centre. Out of these, five critical parameters can be seen on the drivers’ console. The purpose of the VHMD is to monitor the vehicle health continuously and to check how the driver is performing – whether he is using sudden brakes, sudden accelerations, over-speeding etc. Thus this system facilitates making a driver score card for the drivers’ performance.

The driver console will have two way communication with the control centre. The view from four cameras, including the rear view camera is displayed on one screen of the console When any of the five critical parameters – route selection, passenger information system, security cameras, vehicle location and vehicle health – are low it gives suddenly a pop-up or warning message so that immediate action can be taken.

Some detailed specifications have been given for Passenger Information Systems (PIS) as a part of UBS II and display of special signs has also been added. A location based information system has also been added which will help to generate revenue. For example, if the bus is passing through a mall and if the mall owner is a potential advertiser who would give money to the Special Purpose Vehicle to display location wise advertisements, then immediately the bus information system will display information that the bus is passing through a mall which is famous for a particular thing. So this is another way of earning bus revenue and this has already been experimented,

The Ministry has also added the Noise Vibration and Harshness (NVH) standards. This specification is to control the noise, vibration and harshness in buses which make bus travel very uncomfortable. It gives the commuters a metro experience while riding a bus. These noise standards have been defined for the premium segment buses for the time being, and have been defined with a road map for the other buses also. Since premium segment buses are meant to attract car users, they have added advanced features and stringent norms for the noise, vibrations and harshness.

Previous: On-Road Parking Exploring Solutions
Next: ETC will bring uniformity of payment across all toll plazas and increase efficiency of toll collection