San Francisco with its golden gate, Paris with the peripherique as a motorway, London with its underground metro network and japan with its high speed trains show how urbanization becomes the identity of the modern day city. Even emerging India gets its urban representation with the Bandra-Worli sea link bridge in Mumbai and the Delhi-Gurgaon expressway lending a strong visual reference to our modern Delhi.

The energy that needs to get invested in infrastructure is large and is at large, public. This expenditure deserves deliberation and needs an educated design direction. A holistic and integrated approach is required to create a balance between design and engineering.

Thus, urban design needs to possess optimum visual and experiential life with complete technical competence. One cannot work without the other in isolation and still claim to be a ?state of the art infrastructure design?.

The potential of infrastructure to please the eye and to uplift the soul is not lacking in historical precedent. Some of the greatest monuments to the genius of ancient architects remain those that served as essential infrastructure; one of the most notable examples are the aquaducts constructed by the Romans. From the days of the modern dictum ?form follows function? to the current times, functionality and its form in infrastructure design needs to leave a timeless imprint on the city and the society.

Engineering these urban bridges to bring in secured structural and functional systems in the city needs a detailed design approach to be undertaken at the next level. Fundamentally, one should understand the challenges and the opportunities. It is an element that is seen by the citizens daily. An element, that interacts and connects with the city. Thus its capability to become the image of the city at the micro level and its landmark at the macro one is impressive. The upper deck offers the riding experience where one starts experiencing the city from the bird?s eye view. An image that never fails to excite, while making the smooth transition over a dense knot, or facilitate a pleasant experience. The lower surface area has the junction and the speed of traffic that has a larger timespan to talk to the structures. Thus the design intervention needs an understanding of this audience and the rate and scale of their experience and interaction to bring out the optimal solutions and artistic expressions.

Each element of the structure needs further resolution and detail. The basic pier shape hits the human eye for the entire surface traffic. Shaping the pier to receive the structure above is a fairly sensitive issue of a functional form. Aligning the lines and curves of the underbelly and diffusing the structure to the ground through the pier needs an elaborate study of the structure.

Last but not the least, the texture of the entire structure, whether to avoid sticking of bills or to exaggerate the lighting effects, brings in a complete graphic layer to this city structure. This is even more elaborate and relevant for the retaining earth walls as these large concrete panels form a large tapered wall in the middle of the city. The underbelly also needs to state the time it has been built as today?s technologies and materials allow multiple opportunities of sleek and simple solutions that are visually powerful. The upper deck?s crash barrier treatment and design is an obligation to enhance the entire driving experience. The various junctions and nodes, terminations and connections need architectural resolution to ensure a final designed product.

Englishman Norman Foster?s southern France viaduct and innumerable projects by Spanish Santiago Calatrava support the above argument to perfection. Their sense of shape, proportion, scale and the level of detail make these city structures as urban sculptures. 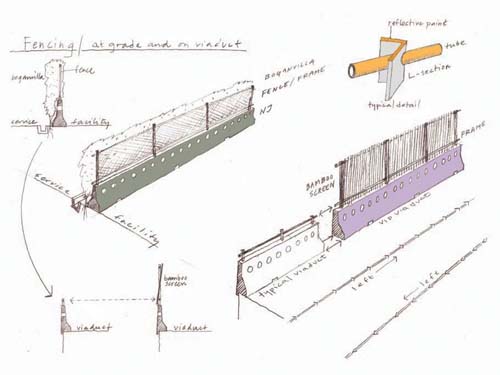 One of the notable attempts at an aesthetical structural solution is the approach to the Wazirabad ( North- East Delhi) cable stayed bridge. These have an ambitious structural system with precast concrete fins that can be seen in the underbelly that defines the evolving engineering practices. They were specially designed to visually communicate with the heavy traffic below, as well as on them.

Lighting forms a very powerful part of the design tool in infrastructure. During the day, it forms a strong visual vocabulary that characterizes the city. Streetlights are large and repetitive elements that bring in a visual guidance to the vehicles from a distance due to their sheer height. They form the strongest icons on flat road and bring in the first signals on sight as one approaches nodes with flyovers along or against its direction of flow. These ?sticks? bring a certain rhythmic and playful imagery.

An interesting example of this is the various roads and junctions of Putrajaya, the new capital sister city to Kuala Lumpur. Each street light design almost lent itself as a signage system to the city structure. In this scheme, primary, secondary and tertiary roads have different lighting solutions, technically and visually. Therefore even without the ?bulbs? the energy lighting systems dissipate to an urban structure is interesting.

And at night, lighting lights up the relevant spaces with different design solutions. They highlight themselves, their own structural and landscape assets. They light the surrounding areas to ensure a safe and secured traffic transit. The also become points of high energy and character for the city at night to attract people and practices. From the Indian street food to studying under the streetlight, cultural stories and stigmas get associated with this urban element. The lux levels and vertical illuminations are no longer the only critical lighting variables for a solution. One clearly has graduated to the next level of design for the contemporary city.

An urban design project that attempts to capture the experience of driving through an urban zone of the city, via a dedicated expressway. The idea was to split the user?s perception into three zones. One – a high profile VIP route to Delhi?s domestic and international airports. Two – a ?commuter realm? of the fastest growing suburban district in the country – Gurgaon with its skyline. and third – ?the trucker and the tourist? zone through the large scale industrial development that leads to the pink city of jaipur. The project is one of the largest toll plazas of the country with state-of- the-art lighting, landscape and signage punctuating this international facility. The lighting of this expressway is iconic and interesting with colorful gestures and angles.

Landscape design always tends to take a back seat in architectural projects. At the urban level though their role reversal is seen. Setting a background to a building translates to building a foreground to the infrastructure facility. The approaches to a junction see a large open city space that needs a strong intervention with hard and soft landscapes to diffuse the driving in transition and enhance the driver sensibilities to the same. A difference in typography is almost a reason enough to attract attention and provide relief as one comes out of dense city structures to these large expansive greener pastures.

Hardscapes prepare a ground from which the structures grow, seeming almost natural. The footpaths for pedestrian routes are the most tangible element of design in the entire facility that literally ?touches? the city dweller. The blank large non-green expanses are either functional in their scope or answer the need for a maintenance free rendition. These surfaces are opportunities of interacting with the city with signage for literal messages and punctuations of colour for more abstract messages. Soft scapes play a very loud role in this. These are the literal breathing grounds for the city. They provide the much-required green to the city. They bring in softness to the concrete and tar of the structure. The play of loops and lines of sights at a junction also lends clues to the nature and number of trees. The character and property of each typology of tree renders a balance to the city?s concrete jungle.

The largest cloverleaf junction of the city (towards Panipet), this project came across as a complex exercise of stratifying and streamlining the vehicular and the pedestrian movement through this junction. An entry into the city from the north brought in a bus terminus, four way vehicular interchange, pedestrian cross overs and cycle tracks into a coherent design solution. Two-level, signal-free traffic movement, four-level, hi-tech pedestrian movement and a multi-deck node for an interchange facility were created. Exclusive state?of-the-art streetlights, detailed pier shapes and textures and the white steel vocabulary gave the project a global look and feel. The landscaped greens form a complementary dialogue with its cloverleaf shaped infrastructure.

The Moolchand underpass was a tremendous opportunity of influencing large pedestrian and vehicular traffic. A concept of a circular tube to organize the junction was evolved. The suspended bridge and fins as well as the caterpillar like structures over the underpass lend a new identity to this famous junction.

Prembari underpass junction in north Delhi was an interesting experiment on a metal framework holding up membrane net structure to cut the light at the junction of the underpass and thereby enhancing a comfortable transition. Also, the walls were treated as a bright relief. The Indian institute of Architects, for the first time in its history, has introduced a design award for infrastructure in 2012. Archohm received this for its Vadodara Bharuch Toll Plaza. This award was well received and appreciated by the design community. This has been an interesting step for architects to have accepted and identified their role in this built form.

Sourabh Gupta is an alumnus of CEPT, Ahmedabad and Technical University, Delft, the Netherlands. Archohm is a design studio that offers design consultancy for architecture, urban design, interiors and product design. With over 14 years of experience in Architecture and Urban Design, Sourabh is renowned for his capabilities in conceptualizing, designing, and detailing.

Mridu is an alumnus of the University for the creative arts in the UK. Deeply interested in the discourse of Architecture and urbanism, she is the editor of Archohm?s in-house newsletter called the Archometer.