If an intense conversation while driving a vehicle threatens to impair your judgment on the road, you might soon have a car that will sense danger and react to avert accidents. The process of providing such technology and road safety solutions is on in Sweden. Also, Italy has come up with a software – iRoadSafety – for all existing smartphones which allows users to photograph a dangerous scenario (road junction, road pavement problems, signs, pedestrians and any other problem) and send by smartphones to an Information Data Center (IDC). The IDC then classifies the information and forwards a recommendation to the Road Management Authority in the same time the IDC provides to place the item on the iRoadSafety ‘blackspot’ map. Latest technology, hence, has now begun contributing towards road safety in a significant manner.

Various studies have revealed that it is not the handheld or hands-free that is the reason of road accidents but the actual conversation that is dangerous while driving as it takes away the focus from the road. The driver, while talking on the phone, is more focused on the conversation than on the environment or the events happening on the road. Swedish Transport Authority (STA), therefore, is planning to start detailed conversation with Sweden’s telecom companies to provide in-built phones in cars. The STA is working on specific areas. Patrick Magnusson, Road Safety Expert with STA’s Road Safety Unit told TrafficInfraTech, “If the car ‘sees’ a danger, it will react. If the driver reacts in some sort of strange or funny way due to mobile conversation, the car will react by slowing down, turning the phone conversation off or putting the phone on stand-by mode. Texting while driving will also be taken care of by that technology.”

He adds, “A built-in phone would enable the driver to answer when he receives the call by just saying ‘answer’ instead of picking up the phone and pressing the talk button. Though STA is not against Bluetooth, it feels that Bluetooth isn’t user-friendly and built-in phones would contribute more towards safety.” He says that the smartphones have more visual capacity that creates problems for road authorities and road experts as they act as ‘visual distraction’.

The above steps are being taken after various studies threw up some interesting results. The results of a study ‘Accident Analysis & Prevention’ funded by Swedish National Road Administration (SNRA) show that driver distraction is one of the central causes of road traffic incidents. The researchers of the study opined, “Mobile telephones are tangible devices (among many other electronic devices) that can distract the driver through changes in the workload. Forty participants were asked to complete a motorway route characterised by a low level of road complexity in the form of vehicle handling and information processing.” The experts who carried out the study said, “A peripheral detection task (PDT) was employed to gauge mental workload. We compared effects of conversations type (simple versus complex) and telephone mode (hands-free versus handheld) to baseline conditions. The participants’ reaction times increased significantly when conversing but no benefits of hands-free units over handheld units on rural roads/motorways were found. Thus, in regard to mobile telephones, the content of the conversation was far more important for driving and driver distraction than the type of telephone when driving on a motorway or similar type of road. The more difficult and complex the conversation, the greater the possible negative effect on driver distraction.”

So, what can be the solution? “The solution lies within the car itself,” says Magnusson. “We’ve studied this deeply with some simulator-tests and they show that there’s no actual proof that talking on the phone while driving is a problem because we can’t see it in our accident data. And there is no real life study in this regard either (probably anywhere in the world). So since the conversation by drivers while driving cannot be completely done away with, it is better that we try and find solutions on making those conversations safer – within the car itself like ‘building in’ the mobile phone in the car. This is just like finding ways to handle the issues of DUI and speeding on road safety. In Sweden, we like the word ‘collaboration’ (our Silver Bullet). So what we are working with right now is getting the car-industry (Volvo, Saab and others) to start discussions with the telecom industry (like Sony Ericsson) and make it find the solution instead of using ‘old’ instruments like laws and regulations”.

The slowing down of car, switching off the phone or putting the conversation on hold are steps to bring the driver’s focus back on the road. The technology will depend on assessing the emotional quotient of the driver when the conversation turns a bit intense which might make him tense, angry or extremely excited. In such a scenario, it is important to bring him back to his main task – driving. There is a probability of other such ‘safe’ procedures too being added to these steps. Magnusson informs that Volvo cars are fast moving towards “context awareness” which means that your mobile phone will not answer an incoming call in “dangerous situations”. So, for example, if you are crossing an intersection and your mobile rings, you will not be able to put it in the answering mode.

Apart from the above study, a Meta-Analytic Approach was adopted in Sweden for some more research for General Motors Corporation on the performance of the driver while being engaged in conversation. Each of the 16 studies (37 analysis entries) included in the project examined driving performance in terms of lane keeping (or tracking) ability or response time to a road event or stimulus. The experts identified five moderator variables that were hypothesised to impact the costs associated with cell phone use: Measure of driving performance, handheld versus hands-free phone, conversation tasks versus information processing tasks (like word games and mental arithmetic), in-vehicle (passenger) versus remote conversation and simulator versus field studies. Similar to the above study, this Meta analysis too revealed that the conversation was the main danger. Say the authors, “Costs are primarily derived from the conversational aspects of cell phone use as opposed to the manual aspects of holding a phone.”

Another analysis of studies by Monash University points out that regardless of legislation and its impact on behaviour, mobile phones will still be used by some road users. The report states, “Research suggests that bans on mobile phones’ use do not affect long-term behaviour and need sustained and consistent enforcement and publicity. Therefore, it is important that mobile phones are ergonomically designed to accommodate driver limitations and capabilities so that any negative effects on driving performance that they might induce, such as distraction, are minimised.” 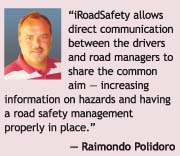 Research, all over the world, on road safety has been leading to many well-thought out safety management systems. Italy boasts of a software, iRoadSafety, that works on all existing smartphones in the country. Developed and patented by Neos and TMS Consultancy, Italy, the software allows the users to share information on hazardous situations on roads. They can photograph the problems and send them through their smartphones installed with iRoadSafety to the Information Data Center which classifies the information and forwards a recommendation to the Road Management Authority. It does it in exactly the same time in which the IDC provides the information to place the item on the iRoadSafety blackspot (danger point) map. As a result, the iRoadSafety users are immediately alerted by their smartphones when they approach the danger point because the smartphone produces an audible and visual signal before the driver reaches the spot.

“Thus,” says Raimondo Polidoro, Director, TMS Consultancy, Italy, “iRoadSafety allows direct communication between the drivers and road managers to share the common aim – increasing information on hazards and having a road safety management properly in place. iRoadSafety is at present operational in Italy but it can be used in any country which is covered by GPS Signals and internet connection.”

The IDC is the operating platform provided by iRoadSafety buyers. The buyers can be governments like the City of Rome and the Country of Crotone, or private companies like the insurance companies and consumer associations. Polidoro informs TrafficInfraTech that the buyer of the full version of iRoadSafety can find out who the end users of the application are by the User ID and password access procedure. The light version, however, will be given free with registration requirement for users.

In Italy, the National Road Safety Plan is actively in use. It aims to reduce the number of deaths in 2010 to 50% as compared with those in 2000 by adopting the guidelines of the European Union.

TMS Consultancy is a worldwide independent and private consulting company working on issues of Road Safety Management. According to Polidoro, TMS Consultancy Italy (the Italian division which is in the field of road safety analysis of over 12000 km of roads since over a decade) and Neos (creator of Mobc3 platform with over 18 million active users is the first cross-platform that allows to develop a single software code running on all mobile devices on the market) are working on a user-generated mobile platform. “We will offer a light version by free services to Italians and European drivers (road users in general) to build the user generated road blackspot network. The platform on iRoadSafety.com will open by the end of 2010.” 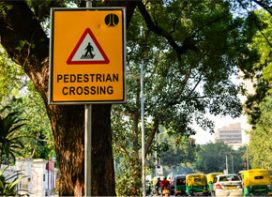