Then we had GPS antennae which initially needed direct exposure to the sky and having a vehicle garaged affected its utility as it was ‘not available’ under covers. The next generation had overcome the above issues to a large extent when the new antennae were inbuilt. With this, the antennae, could be kept hidden and did not need direct exposure for connectivity. They were less visible, less approachable and hence less vulnerable to tampering.

The tracking through GPS with the aid of limited satellites earlier was less accurate while the present, improved satellites and their increased numbers have resulted in better accuracy. However, the SIM card and its range still remains an issue. Satellite phones are now being proposed for approval for adventure loving tourists on excursions in remote areas. If this could also be considered for and extended to certified cash vans transporting high value amounts in remote and crime prone or red corridor areas, it would be very meaningful and helpful. After all, such losses are ultimately national losses and need to be countered as such.

Use of technology in such scenarios is not limited to GPS monitoring and tracking remotely but has other concerns as well to be addressed simultaneously as solution, this being cash in transit.

There are certain differences between cash or valuables in transit and movement of perishables like milk and bread, newspapers at break of day or movement of oil tankers, high in both value and volume.

While the major parameters in movement of perishables and newspapers are their timings and maybe kilometres covered, oil tankers are concerned with timings, routes, halts – both for location and period of halts – and keeping a check on pilferage. Cash in transit’s first concern is whether the route adopted through tracking matches the specified scheduled halts at authorised locations only. While this could be monitored through the GPS tracking, an important concern is whether the place it is being offloaded at is the one actually authorised. The latitude and longitude matching of both the pre-identified site and the cash van should be positive. If this is not the case then the code for the lock on the cash compartment of the cash van would not be released. From here on the concern grows when the cash box with cash/valuable now leaves the van and is prone to loot when carried on foot. In such cases we need to track the cash box. For this, the cash box should further have RIFD chips which enable tracking and detection. This is limited by the battery life the chip has or the range of detection the chip offers. There have been cases in the past where the cash van itself was driven away and could not be tracked because the SIM lost its connectivity and there was no signal thereafter. The RIFD chip battery life may be enhanced by a few days but a concern is its range of detection later which is limited to few meters. Technology can provide high level detectors which could also go to larger extent of search through high level trackers /detectors but is limited in use and a liability by cost. Solutions cannot be bigger than the problem. 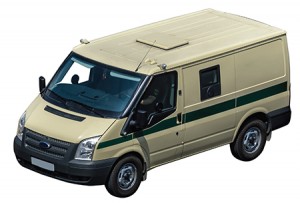 There are various type of locks available for cash van doors and cash boxes which can be used in other scenarios also. The locks could open when the coordinates match and codes issued when the authorised user reaches the van or vice versa, one key at other end which opens multiple locks. If one key is lost, all locks should be changed.

The use of two wheelers as escort vehicles or for monitoring when on patrol duties have also been tried in the past with poor results as GPS monitoring fails in majority of the cases due to poor battery backup. Two wheeler battery is not adequate to sustain the power required by the GPS, it goes off when switched off or drains the battery completely. In case of an additional battery add-on the charging is an issue again. Better solutions in this regard would be highly beneficial, probably even to the pizza delivery boys as well as for the security supervisor on patrol duty.

The required technology is thus available, what is needed is its customisation to suit various usages. There should be overlap of processes and interface of technology/software for optimum use, plus there it should be available, which is the key word to success. It would also be prudent to take into account the fact that technology alone does not serve the purpose. We should be practical and take ground realities into account and have in place dedicated monitoring teams and a response mechanism in place which reacts and responds to deliver correct and timely action for desired results.