In an exclusive to TrafficInfraTech Prof MN Sreehari, Advisor to the government of Karnataka on transportation, writes on the wrong policies and bad implementation of transport infrastructure projects in Karnataka in general, and Bangalore in particular

In an exclusive to TrafficInfraTech Prof MN Sreehari, Advisor to the government of Karnataka on transportation, writes on the wrong policies and bad implementation of transport infrastructure projects in Karnataka in general, and Bangalore in particularcity, circumferentially, radially and outwardly has resulted in the growth of population, number of registered vehicles and their related problems. Presently, the population hovers around 85 lakh. Add to it a floating population of 10 lakh people and a vehicular population of about 42.5 lakh. On an average, almost every second person has one motorised vehicle to move in about 7000km length of the roads and 42000 junctions manned and controlled by only about 3500 traffic policemen.

The urban planners have given more importance to solving vehicle related issues. They have resorted to widening the roads that have shrunk pedestrian walkways and jeopardised their safety. Almost all of us are pedestrians at some time or the other ? even the affluent class walks at least after parking the vehicles. If we look at the number of accidents of pedestrians we find that in 2007, the number of pedestrians killed was 518 and injured, 2367. In 2008, the respective numbers were 455 and 2316, in 2009 they were 365 and 2158, while the next year 400 people were killed and 1933 were injured and in 2011, the numbers for the deaths and injuries were 562 and 2014. This shows that there is no values for human lives.

With the various ongoing various infrastructure projects in Bangalore like Metro, Monorail (coming up shortly), flyovers, ROBs (Road Over Bridges), RUBs (Road Under Bridges), power projects, water supply projects, etc., almost all roads are unsafe to commute. The inordinate delays in completing these projects, due to various reasons, not only cause huge loss to the exchequer but also adversely affect public safety and convenience and lead to congestion and increased number of accidents. The public gets totally confused and finds it difficult to use the right-of-way including footpath for its safe movement. For the road users everything in Bangalore is in short supply with pedestrian impatience often resulting in road rage. Bangalore has also earned the dubious distinction of being home to the worst drivers in the world.

Though the government sincerely frames policies to solve these issues, the pace at which it executes them is very slow. There is a mismatch in the planning and execution which results in traffic mismanagement. Hence, many investors have been moving out of Bangalore in search of better options for their business.

Bangalore has grown over the years from a village to town, town to city, city to metro and metro to mega city but the roads have not grown in proportion to the growth of population, buildings and activities. At present, Bangalore roads cannot take more than 10 to 12 lakh vehicles. Hence, there is an acute gap between the infrastructure supply and demand. And to make matters worse, this gap has been widening rapidly. There is no scope for widening the roads as that affects the common man who would lose his prime land. Since people are highly dissatisfied with the government, even TDR (Transformation of Development Rights) and FAR (Floor Area Ratio) will not work in this case.

There is a wide gap between young and old drivers with each blaming the other for high ratio of road accidents. While the old have always grumbled about the driving behaviour of the young, as per the available records, accidents due to car crash begin to rise after 60 years of age and rapidly, after 70 years of age. This problem is wide in all modern societies like those in the US, the UK and Japan. As long as older people are active in driving, it is essential to ensure their quality and safety of life rather than banning their driving. Hence, there is a need to develop safe walking zones and provide safer modes for mobility.

Time is ripe to create a new Bangalore, like Delhi, with good facilities and infrastructure put properly in place before people migrate to othercities. The new townships should have all basic amenities and facilities and must be attractive enough to attract people to move out from the crowded and congested Bangalore.

Land acquisition is often a sensitive issue and must be handled with utmost care. The state government should bring out an ordinance using SPVs (Special Purpose Vehicle) for time bound implementation of projects.

Infrastructure is identified as a key factor for the development of an urban area which can be sustainable in the future. Many infrastructure development projects are carried out according to old requirements. So, they consume large amount of finance. Hence sustainability is the key mantra for development. Today?s planning and execution of major infrastructure projects must be able to meet the requirements of the future. While the objectives of the project need to be met in a cost effective manner, the environmental concerns too need to be addressed efficiently. Sustainability, keeping the future vision in mind, needs to be the mantra.

Though Karnataka favoured investment from India as well as the entire world to carry out projects, there is a need to ensure easy transfer of land for implementing all infrastructure projects without any hassle. Land acquisition is often a sensitive issue and must be handled with utmost care. The state government should bring out an ordinance using SPVs (Special Purpose Vehicle) for time bound implementation of projects. 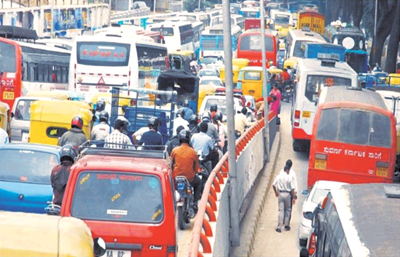 The current traffic and transportation issues in Bangalore have deteriorated due to the ongoing development of infrastructure projects. Though late, we require an integrated and sustainable multimodal transport policy to solve the ever growing problems in Bangalore. Metro was delayed and monorail plan is yet to be executed. As a result of this delay, we are losing about `65 lakh every day. It may be difficult to introduce BRT in the city as its roads are very narrow and they do not have more than 2+2 lanes. We cannot reserve 1+1 lanes for this purpose.

For the sustainable growth of an urban area in particular and a state or country in general, the roads, airports, railways, power & water supply and urban transport infrastructure like metro, monorail & BRT must be implemented. Karnataka government is working seriously towards it but there are challenges. They include allocation of funds, mindset of politicians towards growth ? their agenda and priorities and land acquisition. The government is trying to adopt innovative sustainable technologies on a priority basis. In my opinion, this must be done at a faster pace to arrest the compounded challenges.

Since Karnataka has proposed a bill for infrastructure development framed by keeping in mind the problems encountered in Bangalore, its tier 2 and tier 3 cities are poised for rapid development. It is understood that though this bill is facing rough weather at present, it will be endorsed by the political parties considering the state?s development.

Bangalore is identified as one of the fastest growing cities in India, Asia as well as the world. Hence, it requires immediate solutions which can be sustained for about another 20 years. These will judge people?s patience at times. Funds required must be released by state as well as central governments on a priority basis. Road pricing is one solution to solve congestion on the roads. Coming up with strict laws for issuing driving licences, imposing high garage rent and parking fees, modifying tax structure, etc., can add up to reduce the vehicles on the roads.

The poor condition of roads particularly during rains, failed pavement structure, absence of safe pedestrian walkways (even if available, in a number of areas they are occupied by hawkers & vendors), congestion, delays, poor road safety index and high percentage of air & water pollution due to unending construction of Metro & other infrastructure facilities have resulted in frustration among people. Though crores of rupees are spent on these projects, they do not seem to improve the quality of life of the citizens. Many a time, doubts are raised whether these funds are spent for the right cause at the right time as the visible effects and impacts are least experienced by the common man. Though the projects are often planned and started well, the delay in their progress and poor visibility lead to total dissatisfaction. The laws governing metro rail construction & grade separators, are improper and not transparent.

(In his 36 years, as a Profesor in Civil Engineering, Prof M N Sreehari has published over 100 research papers and authored 12 text books in engineering. A winner of Karnataka Padma Bhushan award from Karnataka government, he has been Advisor to the governments of Karnataka and Goa for transportation.