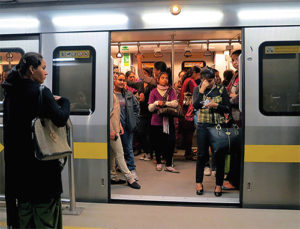 The highlight of the Driving Smart Mobility Conference held during Smart Mobility 2018 was the ‘Women in Traffic’ session. The vibrant discussion emphasized the significance of environment sustainability and gender equity in transportation. Through two enlightening sessions, the panelists presented some key research findings on the ways that half of our population, our women and girls travel , and their patterns of using transportation systems. The sessions also emphasized the role of transportation infrastructure, systems and institutions in ensuring that their travel is safe, accessible, convenient and affordable. The policy brief on women and transport in Indian cities authored by ITDP and SafetiPin was also presented. The panelists of the opening session ‘Transport Policies & Urban Planning’ were Krishna Prasad, DGP & Chairman of Road Safety Authority of Telangana Government; Dr. Nandita Shah, Co-Director, Akshara Centre; Dr Ashish Verma, Associate Professor, Dept. of Civil Engineering, Indian Institute of Science; Prof Amita Bhide, Head of Habitat Studies, The Tata Institute of Social Sciences and Sonal Shah, Urban Planner.

We need to recognize that our transport is deeply gendered. Women not only travel differently from men but their access to personal and private modes of transport is unequal. Due to the predominant caretaking responsibilities that they perform,

we see that women’s mobility is characterized by trip chaining. That is, they may perform as care-takers other trips either to schools or to hospitals or to markets on their way to work or they may also have non-work trips. Women are also more likely to be accompanied with dependents or travellers, are also more like to travel consistently in the peak and in the off-peak hours.

Therefore, when we think about planning a transportation system, we need to acknowledge this. Data from the census of India which was published in 2011 revealed some interesting facts. We analysed the data for some of the big cities in India and found that there was higher percentage of women who worked from the place of residence as compared to men. We also found that the average travel distance was lesser than that of men and 84% of women used sustainable modes of transport. They walked more, they cycled, used public transport but predominantly buses and an intermediate public transport in the form of rickshaws, shared rickshaws and other vehicles.

In Bangalore, Kolkata, Mumbai and Delhi, and we find that on an average about 75% of the trips made by women again were by walking, fewer trips by cycling and by public transport that is predominantly buses. If we look at Mumbai we find that more than 90% of women are using sustainable modes of transport.

It is not only about physical infrastructure services and operations but it is also about programs to change social behaviour and encouraging economic opportunities for women.
– Sonal Shah

However, we need to acknowledge that our streets and our public transport are extremely hostile to women. Data by women’s groups across the country have revealed that there is high level of sexual harassment on the streets while waiting for the buses or in public transport as well. We have data from Delhi, from Mumbai, from Calicut and from Lucknow. The NCRB revealed that about the rate of crimes in cities were higher than that of the national average. Now, this could mean two things, it could mean that there are more crimes in cities against women or there is also more reporting.

Indicators for walking, cycling and public transport are recommended in order to provide tangible guidance to cities on how they should design the transport systems. For example, we provided indicators on street connectivity because suburban street networks will disproportionately affect women as they walk to their various trips. We also identified indicators for designing pedestrian facilities focussing on level of service approach, road safety, street lighting, amenities, universal accessibility, information and street vendors as they provide informal surveillance in our streets.

The guidance for cycling included not only cycle tracks to provide safer cycling infrastructure but also acknowledging that women and girls may not have access to bicycles and that they may be afraid or not know how to cycle. An example of this is in Santiago where a women’s collective called Macleta worked with women in order to teach them how to cycle and in order to how to repair the bicycles and cycles in groups. When these were combined with cycling infrastructure across the city they found that women’s mode-share of cycling increased from 10 percent to 30 percent over a decade.

Public transport needs to look not only at first and last mile connectivity but also travel within the buses and at stations.

We have to think about route planning and services, particularly services that request a stop in the off-peak night hours so that women stop closer to their destinations. We need to think about affordability and fare integration; safety audits of public transport infrastructure, design of vehicles considering the fact that we have wider gangways, low support handles, emergency numbers, real time information; complaints redressal system and gender inclusive signage as well as creating an institutional structure that encourages women’s employment in the transport sector.