The findings of this study on safety of women public transport passengers has led to some proposals like drafting stringent rules for drivers; Rules for recruitment & selection policies and background check of drivers and conductors; security alarms at bus stops; uniformly leveled bus stops; destination display systems and improvement in the condition of the ordinary buses.

Dr Nandita Shah: The biggest challenge when it comes to including women’s transport in the larger framework of a city’s planning is to translate gender awareness into policy and into implementable practice for gender inclusion.

The question to be considered when planning and designing cities is if women are really being looked at as rightful citizens? To answer that, one needs to start looking at every aspect of infrastructure planning in terms of increasing access for women and the effect it has on their usability.

It is essential to look at Gender Inclusion in a comprehensive way — in terms of transport, Infrastructure, education and health. And to ensure that, we decided to in get engaged with the Development Plan (Mumbai 2014-34) which was being discussed as the vision of the city for the next 20 years.

One the many reasons that makes the participation of women difficult in the workforce has been the lack of public conveniences and public infrastructure including rental housing and care centres. Amenities for women have to get integrated in the planning of the city.
– Dr Nandita Shah

The four years of advocating gave us many firsts. While we addressed the areas of transportation, accessibility and sanitation, among others; we also looked at how the local bodies could be made more participatory and how citizens could be engaged.

The challenge was ensuring that we create mechanisms for participatory inclusion in city planning. The first development plan that was presented by a French consultancy firm was completely rejected by citizens as it excluded the poor and many other marginalised groups including womem. Keeping that in mind, we felt the need to come up with ways in which Municipal Corporation and its planning is more inclusive. Where are the secondary schools, hospitals going to come up? Where are the roads going to come up? What are the ways in which it is going to be integrated with transport? Every integral part of those linkages had to be considered and the aspect of gender was to be incorporated into it.

Safety is another big concern and it is directly linked to the infrastructure planning- An example to understand this would be – the newly constructed, Bandra Kurla Complex – which is considered to be designed smartly and in a modern way. What went unnoticed is that when one designs and industrial commercial space without a possibility of a residential area around it, that space becomes an unsafe zone by the end of the day when the work force is gone — leaving the area isolated. Thus the principles of mixed used plan had to be emphasised. These basic principles that are being considered and used internationally need to be kept in mind when we’re working on new infrastructure in the city to ensure safety and inclusion of women. 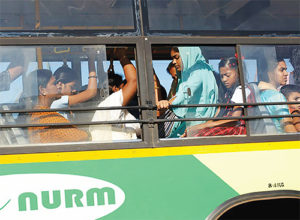 Our biggest achievement was that city planners recognized that men and women use cities differently. There was an acceptance of the need to create different kinds of provisions that will allow women to experience cities differently and formulation of the plan should have those amenities embedded in our demands. With these for the first time in the history of the country, we were able to get a ‘Gender’ chapter introduced in the Development Plan document (2014-34). The Gender chapter clearly articulates the role of planning in changing lives of women with the special focus on the declining workforce participation and need for supportive amenities for women to engage and continue in the workforce and be part of equal citizens in the city.

In the realm of transport, we observed that women — whether low-wage employees, such as those employed in household assistance or vendors or those who work in offices — need access to housing and public transport between places of residence and work. Our attempt is that the public transport safety can also be ensured by the on ground conductors and railway protection force. We have worked with BEST establishment to enlarge the role of conductors to play a preventive role in the bus and this has been implemented through a new rule card. Installation of CCTV cameras which takes away resources are not able to build the required safety for women.