Urban Transport and the role of Metro Rail 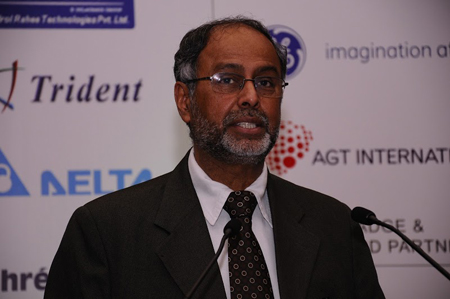 Dr. Sudhir Krishna, Secretary, Union Ministry of Urban Development (MoUD) delivered the keynote address at the Metro Rail India-2013 conference organised by the ITP Publishing Group at Hotel ITC Chola, Chennai in February. He said that the choice of Metro Rail has to be based on a Comprehensive Mobility Plan and Alternatives Analysis with networked connectivity in the region as the focus.

As you are all aware, presently cities and towns contribute to more than 60% of the GDP of India and soon this figure is estimated to grow to about 70%. From 28% of total population living in urban areas in 2001 i.e. about 286 million, this figure has gone up to over 31%, totalling to about 377 million people in 2011. It is projected that by 2031 about 40% of the total population i.e. about 600 million people would be living in urban areas. The million-plus cities, which were 35 in 2001, have become 53 in 2011 census. However, the provisioning of urban services has not kept pace with the growth of urbanisation in most of the big cities as well as in many of the small cities and towns.

The cost of metro rail coaches, signalling and telecommunications, automatic fare collection system, air conditioning etc., which makes the significant cost component of the Metro Rail projects, still continues to be quite high and there is a need to develop appropriate technologies so as to bring this down.

The key to India?s growth is planned urbanisation and the key to planned urbanisation is transit oriented development and sustainable urban transportation. Urbanisation is also important for proper rural development, as the people from the rural areas must move to the urban areas so that the average land holding size increases and the rural productivity can increase. Poor mobility across the cities not only can prove to be a poor dampener to the economic development but is also responsible in a way for low economic output of individuals and development of slums as the poor people are forced to live near the places of jobs or some times take sub-optimal jobs in order to limit their overall travel time and the cost.

As per two recent independent study reports, one each by Mckinsey Global Institute and the High Powered Expert Committee (HPEC) commissioned by Ministry of Urban Development, Government of India, the total investment in urban transport has been projected as more than 50% of the total investment required for urban development in next 20 years which includes housing as well. The rough figure of investment works out to roughly about `1 lakh crore per year for next 20 years for urban transport. The Working Group on Urban Transport, as per the report recently submitted, has estimated an investment of `3,88,308crore in the 12th Five Year Plan, of which `1,50,000 crore is for rail based mass transit systems.

As compared to the Jawaharlal Nehru National Urban Renewal Mission, which envisaged investment of total of `1 lakh crore in seven years, the investment required in urban transport is gigantic. However, even though this figure of investment might seen quite large, ways and means have to be found to generate this kind of investment and also to develop the capacities for effecting the investment so as to not only catch up with the infrastructure backlog but also to plan for the future, otherwise our cities would become totally grid locked.

Because of the success of Delhi Metro, and the way Delhi Metro has changed the life of common people in Delhi and the National Capital Region with its 190km of operational network, there has been a spurt in demand of metro rail projects in the country from various cities. In addition, we also have Bus Rapid Transit System projects being taken up in 11 cities in India, namely, Ahmedabad, Rajkot, Surat, Jaipur, Indore, Bhopal, Pune/Pimpri-Chinchwad, Kolkata, Vijayawada, Vishakhapatnam and Delhi, with Ahmedabad having 62km of fully operational Bus Rapid Transit System which has won not only national but also international awards.

In Mumbai, Mono Rail is being implemented in one of the corridors. In 2006, only about 20 cities had organised city bus service. However, because of funding for modern city buses provided by Government of India under the Jawaharlal Nehru National Urban Renewal Mission, it has gone up to more than 65 cities now in India. We are aiming at scaling up substantially the provisioning of bus services in terms of coverage as well as the frequency in all cities having notified municipalities.

It was noticed that there is a considerable lack of clarity regarding the choice of various modes of public transport as to which modes should be adopted for which conditions. Accordingly, the Working Group Report for Urban Transport for the 12th Five Year Plan lays down the General Guidelines for mode choices. As per these guidelines, Metro Rail can be proposed in all corridors where the Peak Hour Peak Direction Traffic demand is more than 15,000 as per 2021 population projection for a lead of travel of more than five km. It has also been decided that the Government of India would support preparation of Detailed Project Reports for Metro Rail system for all the cities with two million plus population. This would mean that in addition to the present eight cities ? Delhi, Kolkata, Bangalore, Chennai, Mumbai, Hyderabad, Jaipur and Kochi ? where the Metro Rail Projects are under implementation, about 8-10 more cities should also become eligible to start Metro Rail projects in the 12th Five Year Plan.

The likely cities are Ahmedabad, Pune, Chandigarh, Lucknow, Kanpur, Indore, Nagpur and Patna. However, it would depend upon the state governments taking the lead as well as availability of resources. In addition, there is also a need for providing Regional Rapid Transit System akin to Metro Rail in urban agglomeration with population greater than four million. A Regional Rapid Transit System of about 360km in Phase-I is planned in the National Capital Region expanding from Delhi to Panipat, Delhi to Meerut and Delhi to Rewari and Alwar in the 12th Five Year Plan.

However, just Metro Rail can?t provide for the complete mobility needs of a city. In fact, the choice of Metro Rail has to be based on a Comprehensive Mobility Plan and Alternatives Analysis with networked connectivity in the region as the focus. Before a city proposes a Metro Rail, it should have a ridership of at least a million on any mode of public transport so that the shift to Metro Rail is easier.

Furthermore, since the Metro Rail corridors would be the main transit corridors, they have to be well served with a feeder network, which is very well integrated with the Metro Rail System. When we are talking of multi-modal integration, the integration has to be at four levels, namely, infrastructure, operation, fare collection, and information. We would like all metros to have feeder bus services, which could be operated either by the metro company itself or in partnership with either private operators or State Road Transport Corporations.